A few weeks ago I posted the first of 2 boxes of 2009 Finest I have. Here is the results of the second. 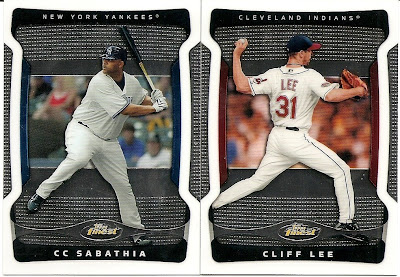 The 2 Cy Young Winners for the Tribe. Current Yankee CC Sabathia and future Yankee Cliff Lee. It's a shame that we can't keep these guys due to cost, but that's not exactly a ground breaking opinion. It is what it is I guess.

I like that CC is hitting. The guy hits (and weighs) a ton. A lot of people really thought he would end up in the NL just so he could hit too. That would have made me happy. 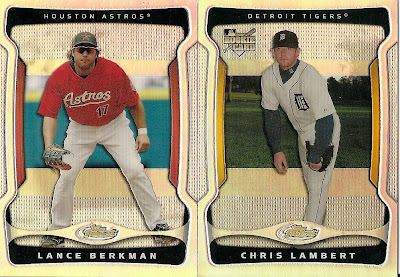 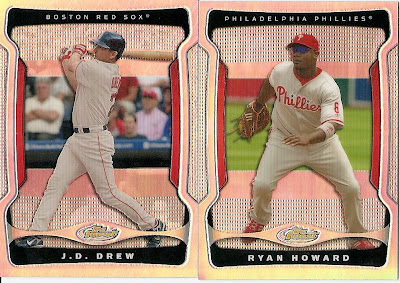 Once again these refractors have strange little lines going through the border. The scan doesn't pick them up. I have no idea what to make of them. 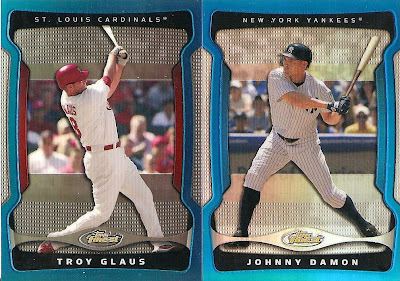 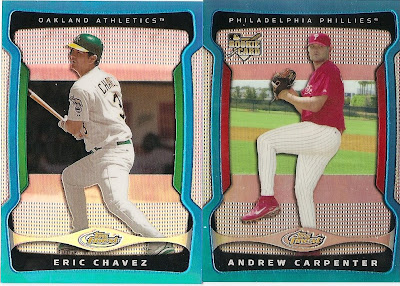 Not a very strong crop of blue refractors, although I think Eric Chavez will catch fire any day now. No seriously, I think a disgruntled A's fan might sneak up behind him and light him on fire. Either that or Billy Beane will do it. 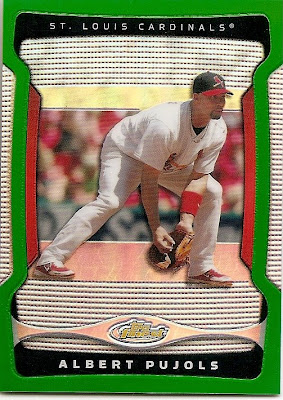 Nice. Always good to see Pujols. Probably the best pull you can get nowadays. 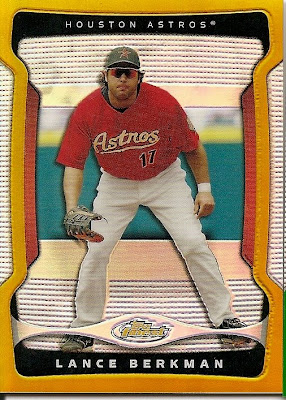 Not having a great first half, but not terrible either. This guy is really good. All this means is he's probably going to have a monster second half. Buy low fantasy leaguers. Thank me later. 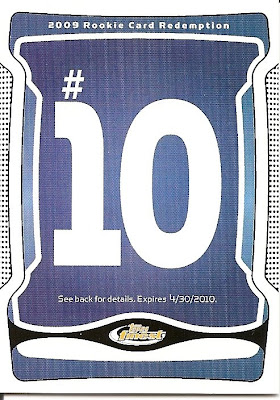 Think this one will be Strasburg? Can they put him in this product and call him a rookie? I don't see why not. They seem to throw the "rookie card" logo around with reckless abandon in every other product. 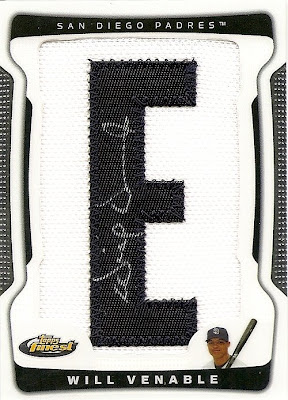 Will Venable. Love this guy. Fantastic prospect. Says here that he plays for San Diego. I've been a huge fan ever since I first heard about him when I pulled this card. 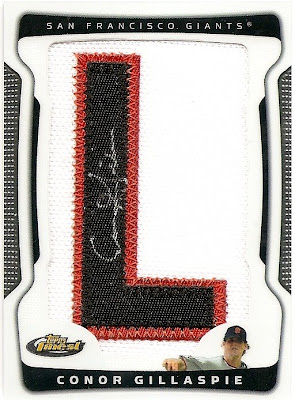 Conor Gillaspie is a guy I've heard of. The more of these auto patch cards I pull, the less I know what the hell I'm supposed to do with them. They're still cool looking.

Not as good as my first box, but still not too shabby. Some cool refractors in there with the Pujols and Berkman. Not enough Indians, but there never is.
Posted by Motherscratcher at 1:17 PM

What would youi want for the Gillespie? Isn't that the third one that you've have got?

Please let me know if you would like to trade any of the base cards away. I am trying to finish this set (Only 51 left)

Actually Zman, this is my first Gillespie. I think I have 2 Parnells.

Gillespie is definately up for trade if you want it. What do you have?

ryanmemorabilia - Give me a few days to get a list together of what I need for this set and what doubles I have. I'm sure we can help each other out.

That Pujols was a nice pull, I love the green refractors - the have pop. :)

I thought you got a Gillespie in the Joe Collector break that you traded.

Anyway, what would you want for it? I have a Hideki Matsui and Rolen refractor from this set and a few base cards if you are trying to put a set together. Do you have a wantlist or anything?

Are the Howard and Carpenter from this break and the Hamels from the last for trade?

Im not sure if you guys are still around on the board, but I noticed you wanted Gillespie's patch card. I just opened a box and got 1/107. write back if you want.