As all of my loyal readers may have noticed, I've added a followers link to the right hand side. Go ahead, take a look, I'll wait. See it over there? Yeah, I have no damn idea what the hell it's for. But Beardy requested that I put it there. And, it's not a good idea to piss off beardy. Just look at that crazy bastard. 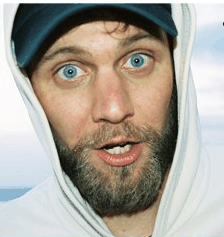 Not a dude that you want to say no to. Am I wrong?

Seems as if I have 12 followers, which seemed really cool to me, until I looked at every other blog and realized that they all have around 40. I never really understood the point of the whole followers thing. I guess it let's you know when someone updates their blog, but doesn't the blogroll already do that? Well, I signed up for a handful of your blogs to start with and I'll continue to sign up for more. I'm officially a follower. Before you know it I'll be twittering with all of the other crazy whippersnappers out there. Damn kids with their tweets, blogs, and follower thingimadoos.

After a year of this (that's right, my 1 year anniversary quietly passed a few days ago. Maybe I'll do something to commemorate it. I thought about making a post but it didn't seem right unless it was a few weeks late) I finally am making an effort to get with the program.

Thanks to Beardy for the much needed kick in the pants.

By the way...Gint-A-Cuffs is going to kick ass.
Posted by Motherscratcher at 12:30 AM

Congrats on the one year thing.

Thanks for not pissing me off!

And lastly, Gint-a-cuffs IS going to kick ass

I am follower #17. I am now a number. My life-long ambition to shed my cumbersome name in favor of something more readily convertible to binary code.

Wow , a year already ! I still have about 4 months to go.No tweets from me either, I don't even have a cell phone ! Could you please email me your address? I need to send out some "stuff".