I'm home....finally. It seemed to take forever to get home. The check engine light was on in the car the whole way, so that was fun too. This will be a short post with a longer post about vacation to come later. I recommend that both be largely ignored as they have little to do with anything.

The first reason for this post is to get back into the swing of things and an updated ACB on all of your blogs.

The second reason is to address a concern of my wife's that proved to be unfounded. My wife was less than thrilled with my last post which basically announced to the world that we were on vacation and our house was open season for all manner of shady characters to come and steal, lounge, party, graffiti, and destroy. It was her opinion that it was unwise to announce our absence over the ether. Maybe she's right.

My counter is this. We have nothing of value to steal. We also have a giant guard dog named Chloe...err...uhhh...Apocalypse Killer (yeah, that's her name), guarding the house in our absence.

I thought it prudent to make a warning here for all of you shady characters who considered breaking into my home to nab my collection of unopened 92 Stadium Club. You may get in, but it's less than certain you would get back out with this vicious killer roaming the premises. Here are some pics to prove it.


This is Apocalypse Killer on high alert: 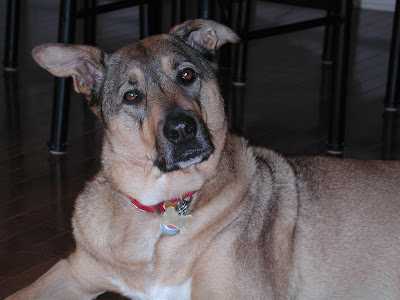 This is what it would look like to any unsuspecting burglar (ham or otherwise) who made the critical error of entering our abode uninvited. 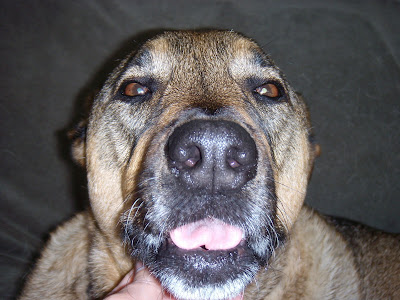 Just look what happened to this poor bastard as his face is being ripped off. His shirt started out white. By the time AK was pulled off of him he looked like an extra from Raiders of the Lost Ark. 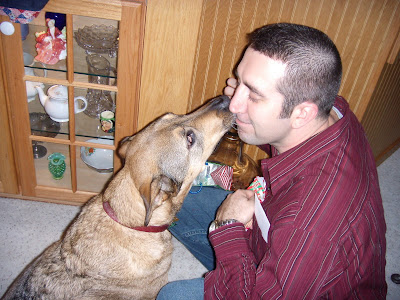 So there you go. It's probably best to just move along if you know what's good for you.

My wife was really only worried about Beardy. I figured he was too busy with the Gint-A-Cuffs to bother with us. I thought we might have some trouble with Captain Canuck (being Canadian and all), but he knew better as well.

Any way, it's good to be home. I will now resume making any and all manner of ridiculous, annoying, and mostly unfunny remarks on all of your wonderful blogs.
Posted by Motherscratcher at 12:08 PM

I actually tried to break in. That killer mutt of yours made me soil myself, so I left. Your window treatments are of a fine quality, so that combined with the guard dog ensured the safety of your shelf full of hobby boxes.

I was there.
My sled dogs had their way with your dog.
Enjoy the puppies.

I was lurking around looking for official "student used" The Ohio State University memorabilia. I brought my attack dog to counter yours but it turned out they just ran around and then laid down and slept.

I agree, beardy is shady. I should have known the Captain was there because someone was sledding off while farting ice.

I DID NOT ATTEMPT TO STEAL YOUR STUFF AT ALL BECAUSE I AM NOT THAT SORT OF PERSON.

Shame on you shady people.

Actually all i took were a couple of diplomas. The seals will be 1/1 crests. The signatures will all be 1/1 cut sigs. I will number all of the pieces with words on them to 100 and the blank pieces will not be numbered.

Stusigpi - after your first comment I looked around and the only thing I couldn't find was my Bota Bag that would hold the alcohol that I needed to sneak into the game. I'll need it again this September because I got tickets to the USC game.

If I don't have it I won't be able to drink myself into bolivion as we are getting our asses handed to us again in the 4th quarter on a national stage.

The diploma idea is a good one and may be only slightly less popular than pulling a scout auto as your box hit. Think we can make any money off of it?

I'm not so sure what USC is going to look like this year. Guess we will see. Could go either way. Either way hopefully the Big 10 can come back eventually.

Sure, we can. Topps and UD have made a ton of money off of junk hits forever. At least the diplomas cost 10's (100's?) of thousands of dollars. If finest can have rip girls and the dork master autos in it, than diploma bits can't be too bad.