I really like this year's Finest. I had 2 spots in Joe Collector's group break a few weeks back and I did incredibly well. I'm sure you've seen other posts about it.

Here is what I got. And from now on, if I ever complain about what I get in a group break, I want someone to print this post out about 1,000 times. Then, roll it up into a phone book sized cylinder, and beat me about the head and face with it for a good five minutes, as if you were Michael Vick and I was a dog. (Is that out of bounds?)

First, a few base cards. With all of the refractors and parallels and what-have-you it's easy to everlook the base set. It happens to be really nice, and may be my favorite Finest design so far. Here are Pujols, Wright, and H Ramirez.

There is also a handy dandy little trivia question on the back. Eg:

Who was the last rookie to win 20 games in a season? (Tom Browning, Vida Blue, Fernando Valenzuela, or Frank Tanana).

I wavered on Frank Tanana because his name is so fun to say, but settled on Vida Blue.

I'm always been better at the pop culture trivia than at sports trivia for some reason. 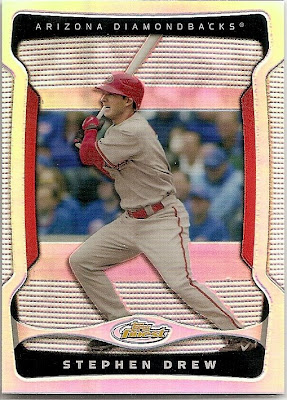 Trivia: Who has the highest career SV%?
I was stumped when Joe Borowski wasn't even an option.

I might try to put together the Blue Refractor set. They are only out of 399 so it seems do-able.

Trivia: Which current franchise has gone the longest without a last-place finish in any season?

I know Iknow, you're all thinking Cleveland, right? Wrong! I know, fooled me too. 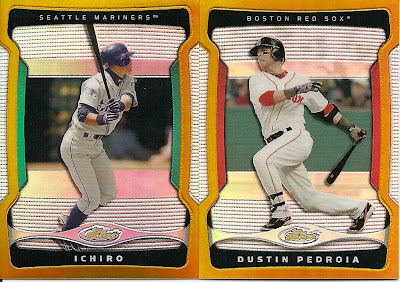 I like how Ichiro doesn't even seem to have a last name any more. 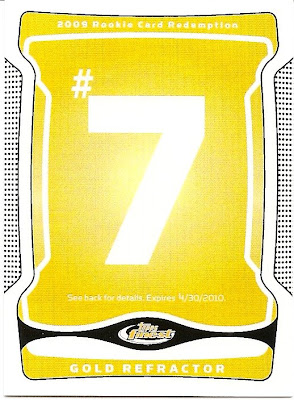 Cool - I can't wait to see who it is. Then again, I'll be honest, I haven't even looked yet. I have no idea when they are releasing the info. I probably won't know until it arrives n the mail, sometime in 2011. By then I will have no idea what the heck it is for. I'm thinking it will be a lot like when you find $20 in your winter coat pocket in the fall when it turns cold for the first time. 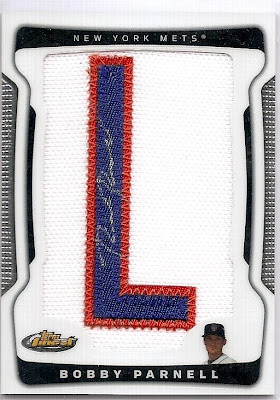 The only problem with these is that the auto's are too small. they would have been much better off letting them sign the white part so that we can read it. I know that isn't how it is done but really, would it matter? It's not like these are game worn. No, their just just some patches that some 9 year olds made in Taiwan for 50 cents an hour and 1 bathroom break (Is that cynical?). 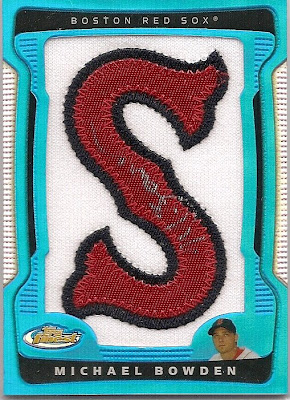 These are cool. I think I just like the blue color.

BTW, please disregard everything I just wrote about signing on the white part. 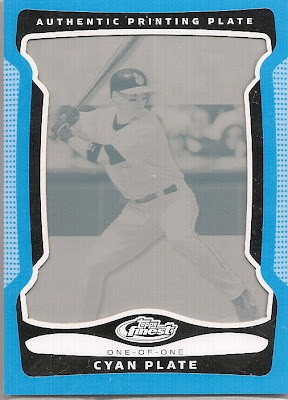 Major thank you to Groat who gave me this plate in exchange for a Ryan Zimmerman Blue Refractor. Grady is my favorite player on this Indian's team and Groat is a Nationals fan, so it worked out, but I can't help but feel a little guilty. This is the only 1/1 card I own and I couldn't be more excited about it.

You know what else? Did you notice that Zimmerman really started to tear it up right after this break and Groat's generosity? Good Karma. That's what it is.

Thank you Stusigpi for the break, and Groat for the trade. Made my month.

I even went on the bay and picked up a few boxes of my own. Got them for less than $70 each so I think I did pretty well. More to come on those.

I Am Joe Collector is currently doing a baseball and a football Group break with 2007 Sweet Spot. There are a few spots open. I recommend it.
Posted by Motherscratcher at 3:14 PM

Yeah, you definitely came out on the right side of that trade.

BUT, Grady has been sucking it up and Zim has been kicking ass. Way to jinx your favorite player with your anti-karma!

I hadn't thought of that until you put this up. I also like Beardy's Law of Conservation of Karma. Karma is neither created or destroyed, but rather transferred from one thing to another.

I wish I had something col to offer you for that shiny Alex Gordon card. Way to go on getting good stuff.

I can't wait to see what you get for that rookie redemption I traded you. I hope it is not a Royal. Ihave a few months to go on the Fowler patch auto.

Oh, and I wanted to thank you for making the trade. I was really hoping to get an autographed fake patch card and you made it happen. I do appreciate it.

Yeah, Karma's a bitch, although I don't know who Eric Wedge adn Mark Shapiro killed to deserve this. This season is awful.

Greg, I'm sure there's something. I love anything Tribe, or Turkey Red, or shiny. Email me your address.

SIJ - same goes for you.


WF is "fullyin" - I'm sure there's a disgusting joke in there somewhere.

ZMan - I'm curious too about the redemption. Wait till you see what I got out of one of the boxes I bought. We may need to talk again.