OK, the Cavs game is over. On to the really important things after that diversion. I'm calling this the "Live To Fight Another Day" edition of the Turk of. First because of the series extending win by everybody's favorite Cleveland basketball team, and the fact that Beardy pulled a major hit (Miguel Cabrera Ad Back) form his pack. I'm just trying to sneak out of here with a push and "live to fight another day."

On a side note, I just want to say how lucky I feel to be able to watch Lebron play here. That doesn't mean I think we have the series locked up or anything stupid like that. I just mean I've never seen anyone quite like him...in any sport, and I know how fortunate I am to see it. I stood right next to him under the Q last year after a game, but that's a story for another day.

Let's see what I can pull off. I'll need a shot like Lebron made in game 2 to pull this one off.

# 9 Josh Beckett 0pts
# 98 Doug Slaten 0pts
# 84 Dan Uggla 0pts (Looking like he's about to boot a grounder in an All Star game. Too soon?)
# 61 Carlos Delgado 0pts
# 85 Danny Putnam 0pts
# C10? Josh Beckett Silk 46/99 20pts (I don't know whether to laugh or cry. I'm still going to lose the pack, but who cares right? This card is fantastic. Even better in real life than I imagined. One of the coolest cards I've ever seen. After pulling this does it really matter that I'm going to lose the pack? Looking back these should have been worth more. I wouldn't trade this for 10 SPs. Just an awesome awesome card.) 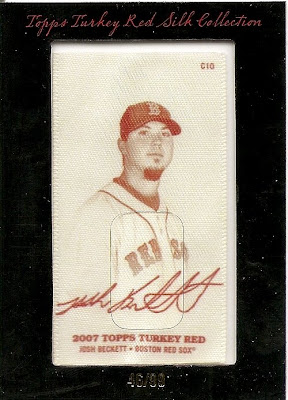 I may have lost the pack, but I feel like I won the war on this one. I'm positively giddy right now. The Cavs one and I pull this. I cannot wait to get it scanned in and posted.

How crazy is it that I've lost both packs that I pulled my big hits? 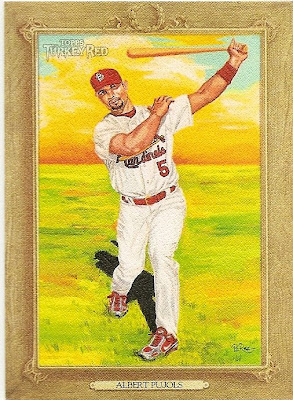 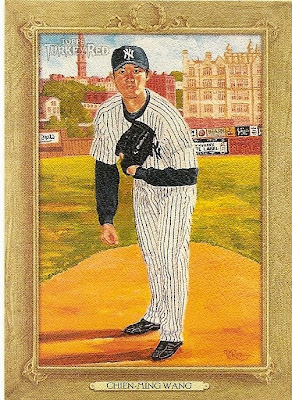 #120 Manny Ramirez 0pts (Another guy we left off the Major Stars list. I guess you have to draw the line somewhere and Manny's cuts are too fresh.)
#55 Josh Hamilton 0pts (but still a nice pull.)
#159 Johan Santana Chrome 3pts Chrome x3 Star = 9pts (I was starting to worry I might lose this one too.) 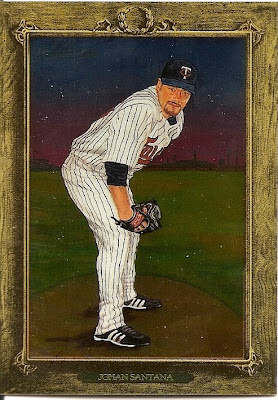 #118 Hideki Matsui -1pts (What do you know. Another Yankee. I'm Beardy's total lack of surprise.) 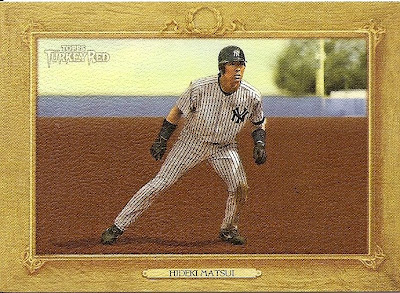 That was quietly an outstanding pack. Pujols, Ramirez, Hamilton, Santana, Holliday, Peavy...really good pack. Of course the only thing screwing it up was the Yankees. Typical.

Looks like another split. Although I think Beardy has to feel pretty good about it after winning another pack when I get a big hit.

Damn, that silk is kick ass. I don't even care that I lost. I can't stop talking about it.
Posted by Motherscratcher at 12:23 AM

I know there's no retro fitting of point values, but there is no freaking way an ad back SP beats a silk. Ever.

gotta agree with the commish, but what's done is done.

the ad back wouldn't have won without the retarded multipliers we put in for "star players". You know, the list we moronically left Chipper and Howard off of.

Hey, that's the way it goes. Mistakes were made. I'm the one who compiled the list to begin with so who the hell do I complain to?

We're still tied, but I'm getting that "Cleveland" feeling about the outcome of this.

Still, sweet card, right? I can't stop being happy about it. I've never actually seen a real silk before.

I pulled one #'d to 10 out of A&G last year (Dan Uggla). At the time, it was my best pull ever. I was pretty thrilled to see the Hamels though.

It's always nice to pull a "hit" that isn't a guarantee.