I promised that I would think of a better name for these posts than "Achiever Review." What I came up with is "Workin' In Shifts." Besides the obvious (for some) Lebowski tie-in, I just like the way it sounds. So there you go. From now on, these posts will be labeled Workin' In Shifts. Me and the boys down at the crime lab will be offering our witty, brilliant, nonsensical, and occasionally indecipherable observations on the cards I receive as gifts or in trades from the Blog People.

These particular cards are from Night Owl. I'd wager that there isn't a single one of you reading this that doesn't know who he is. A few months ago I pulled a Blake Dewitt auto from a Stadium Club blaster. It was great! It was the first (and only) auto I've ever pulled from a blaster. It was even better turning it into a bunch of new Indians cards to contemplate.

There were so many cool cards that I split it up into 2 posts. Here is part 1. Part 2 to follow in the next few days (although it is always possible that it may take months.) 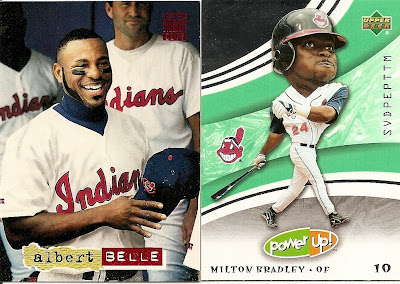 I like this card because it reflects the true nature of Albert. He wasn't a crazy sociopath. He was just a fun loving gentle soul who was kind to all he encountered. I mean, just because he once tried to run over a group of kids on Halloween doesn't make him a bad guy. Even if he did stalk a woman with a GPS device on her car...who hasn't done that before? Look at sweet jovial Albert. Who couldn't love him?

What a goofy looking card! And look at the size of Milton's head! It's like Sputnik; spherical and quite pointy in places. Actually, it's probably about right if we are depicting athletes "egotistically" in this set.

According to this, Milton is worth 10 points. I don't know haw many that is out of but it seems about right. 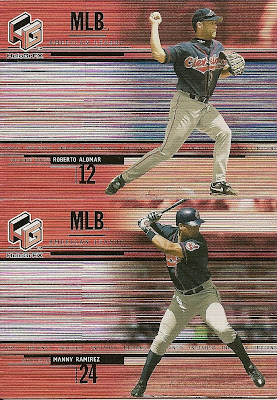 Roberto and Manny, what a pair. Two of the greatest players ever to wear the uniform. Now, we will barely be able to remember them as the great players that they were. It's just sad. Manny really screwed up. The worst part is it really seems like it was probably unnecessary for him. He would have been great without the stuff.

And Alomar; with the HIV rumors a few months ago. I don't know what ever happened with that. I just hope it isn't true. I want to remember Alomar turning 2 with Vizquel.

As far as HoloGrFx goes, these are my first cards. I like them a lot. I actually have a box of them to open. I got it off eBay because it wasn't that much and they sound cool. After seeing these cards I'm excited to open it. 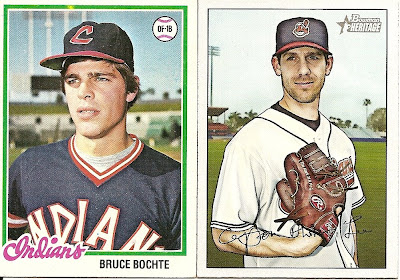 I scanned this card because I didn't know much about Bochte other than he is the manager of the Giants. Heck, I didn't even know he ever played for the Tribe. Don't worry, I figured it out.

THIS Bruce Bochte seems like a very interesting dude. From his wikipedia page: "Bochte boycotted the entire 1983 season as a personal protest over rising player salaries. He believed that money was destroying the game he loved, but he returned without explanation the next season. Bochte is now an avowed agnostic and is working to "save the Mother Earth from humankind's destructive ways."

That's a hell of a thing.How come I haven't heard of this before. This guy is the Pearl Jam of MLB. Alas, Ticketmaster still sells all of the tickets, and MLB salaries have only gotten more ridiculous.

Cliff Lee seems to be back on track for the Tribe this year. If only we could score him some runs. 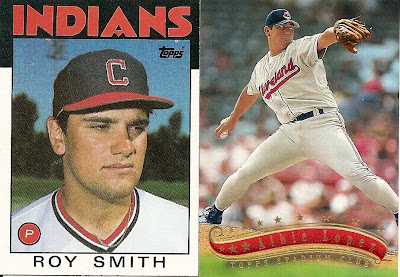 I love getting cards like this because it forces me to learn something about a player that I otherwise wouldn't have noticed. I have no recollection of Roy Smith as a player. The back of this card tells of Roy's accomplishments. Most noteworthy: His first 6 strikeout game was on 7-25-84. I guess that's the best thing that they could find that Roy had done.

So I put him into baseball-reference. There were 2 Roy Smiths. One played only from 2001-2002. The other was named Le Roy Purdy Smith. No mention of this Roy Smith.

At least, that's what I thought. Nope, he's there. That's him. Le Roy Purdy Smith.

In a million years would you have thought that the man in this card is named Le Roy Purdy Smith?

I thought that Albie was going to be a special ballplayer. He showed a lot of promise early on. He was good enough that the Devil Rays made him the 48th pick in the expansion draft, and I was sorry to see him go. It would be easy to say that his career was a disappointment, but he did hang around for over 10 seasons. I bet there are a lot of players that would trade careers with Albie Lopez. 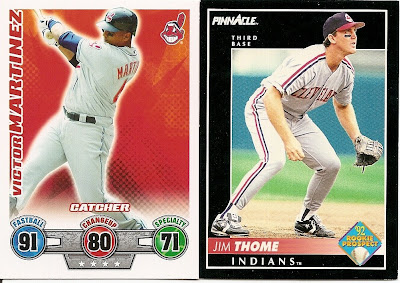 No clue what these numbers mean. What I do know is that Victor is currently batting (as of this writing) over .400. I'll bet those numbers on the front are a little on the low side.

Allegedly a rookie card. I really like this set. Jim was a fan favorite in Cleveland for a lot of years. Then he took the money in Philly and he gets booed every time he comes back to town. Then, he invariably hits 3-4 Hrs during the series. I'll never understand why we boo him (I don't). I'd rather think back to all of the great times I had watching this big farm boy from Peoria turn a franchise around.

This card is great because it says that "Jim is a lefthanded hitter with average power..." Good call on that one. He is left handed I suppose. 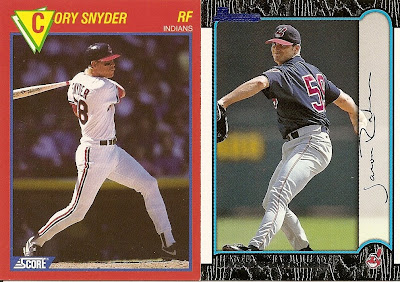 I do believe that this is my only 1999 Bowman card. I like it. Shades of 1987 Topps with the wood grain. It makes me more sad to think about this year's design. Who knows, maybe it will grow on me.

Jason never really made it. 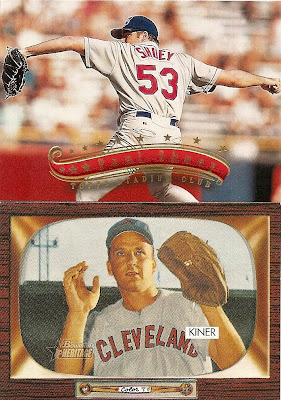 Paul Shuey is underrated and under appreciated. He was a bit wild and he was hurt a lot, but man could he bring it. I loved watching Shuey pitch. I like this set too. Stadium Club cards always seem to appeal to me. Even this year, the base set looks fantastic. It just costs too damn much. I hope Topps gives it another shot.

He finished 10th in MVP, right behind teammate Murray Dickson. I have trouble explaining that.

That's the end of part one. One more post to come from Night Owl. Thanks very much, Greg.
Posted by Motherscratcher at 8:04 AM

Sadly, that's not Thome's rookie card. The Bowman and Upper Deck cards from the previous year are the rookie cards (I don't have those).

Good call pairing Belle and Milton. What a merry couple they are.

I've never heard that thing on Bruce Bochte. Ever. It sounds made up. They make stuff up on wikipedia, don't they?

I know, it's weird about Bochte. Eventually I'll do a little researcg on it. It says that he returned in 1984 with no explanation. I think he returned to spread his communist propaganda.

at least it's an ethos!

I just discovered your blog and this was a cool post.

The only thing I remember about Roy Smith was a game in the mid 80s when he got hit in the face by a screaming shot back at the mound. It was a gruesome injury and if I remember correctly it took him around 18 months to come back. Sadly, he was never the same pitcher afterward.

hiflew - thanks for reading. I didn't know that about Roy Smith. I'll have to look that up when I'm feeling less lazy.

Was it during his time with the Tribe? Man, first Herb Score, then Roy Smith.

I am pretty sure it was either 86 or 87 with the Twins, but like I said this is a fuzzy memory at best. I am positive it was Smith though.

Man, I spent way too much time trying to figure this one out, but at least I know that my memory isn't completely faulty yet.