Here are the rest of the cards that Beardy sent me. 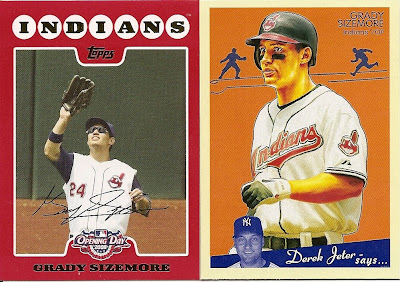 Of course we're starting it off again with Grady. I wasn't around last year until after this product was released. Even after I jumped back into the baseball card pool it took a long time before I knew which end was up. Because of that I have no idea how this product was received.

My guess is that it was largely ignored. Yet, somehow, these red cards are included in a lot of the packages that people send me. I think they're great, to tell the truth. I don't know if it's because of the red. Wait, what am I saying, it absolutely is because of the red. I just think it looks cool. I think this set looks better than the regular set.

I never know whether to pronounce this Gouwwwdey or Goooodey. It doesn't matter I guess. A lot of people like these cards, although I have heard some complaining about this years set. I kind of lump it in with Allen + Ginter, Masterpieces, and Turkey Red. They're all the artwork sets.

I really like the A + G sets. really cool with interesting cards. Masterpieces is great and I love all of the parallels. You all already know that I want to make sweet sweet love to Turkey Red. Sorry Gooooodey, you're hockey. I understand that there are some people that love you, but you're a distant 4th for me.

I think it's because, growing up in Cleveland, I never got into hockey because we didn't have a team. I had plenty to keep myself occupied. I always thought that in an alternate universe maybe I'd be a big hockey fan. Who knows.

Same with Gooooodey. Maybe I just saw it last. I don't think that's it, though. I think it's probably because they decided to put Derek Jeter's face on every card. Who's idea was that? Probably some Canadian's idea. Maybe a Dutchman.

I'll probably get a few blasters of Gooooodey just to have some. 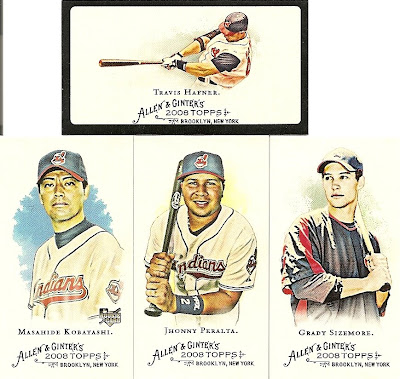 Look at how awesome these are. The art is just so much better than the Goooodey cards. And, the black border is a really simple thing but it sure makes those cards stand out.

I can't wait until this years version comes out. I just worry about them being too much of the same, but what the heck can they change?

I decided to put together a set of A + G. Probably a Mini set or something. Maybe I'll just use 2008 because Bready has given me a good jump start. I think I may have a few more of these laying around, also. 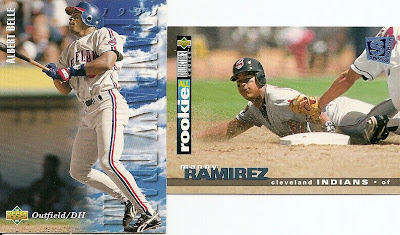 Fantasy Team is right. Belle was a fantasy God back in his prime. As big of a red ass as he was, I was always disappointed that his career was cut short. He was a dick in Cleveland, but it wasn't personal. And, man, could the guy hit.

The back of this card is interesting. It lists 15 outfield/DHers in each league that apparently would top the list of Fantasy players at that position. Included in this list:

Wayne Kirby? Not to disparage these adequate (I guess) players, but Wayne Kirby? David Hulse? These guys were in the top 15 AL outfielders in 1994? Yeah, this was just the AL.

Who the hell made this list? Steve Phillips? Are these guys just those gritty, scrappy players that "play the game right and know how to win" that Phillips loves?

Look at that. It looks like Manny was hustling or something.

Collector's Choice. What a worthless bunch of sets that was. And don't give me any crap about kids needing sets like this that they can afford. Do you really think that a kid is going to spend on this stuff when he knows that there are a lot better products with "hits" out there. Heck no. He's going to get YuGiO or whatever the hell it's called and beg his dad for a hobby box of Stadium Club or Finest.

Of course, what the heck do I know? 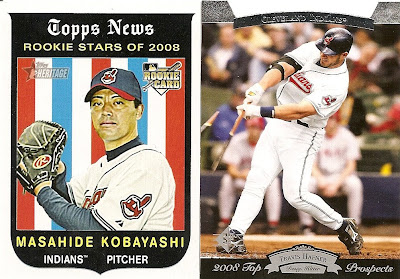 Thanks Masa, it was fun while it lasted watching you not be able to pitch unless we were 10 runs up or 8 runs down. Thanks for contributing to the bullpen that has already ruined our season. Thanks for taking $6 million and sucking.

2008 Top Prospects...WTF? Prospect? Way to jump on that boat just as it starts to sink. Way to pay attention.

I do like the notch out of the top, though. 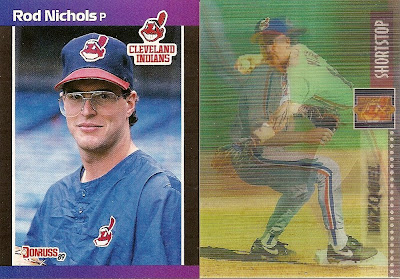 I feel like I've written about Rod before but I can't remember. I guess I could take a moment to look, but I won't. If I haven't yet, I should have. Look at those glasses, man.

You probably know very little about Rod so I'll help you out. According to Baseball Reference, he was a very similar pitcher to Dan Larson and Buster Narum. I hope that helps.

Looking at Rob I have a difficult time figuring out where it all went wrong for him. The guy just oozes domination. He looks like a Hall of Famer. To me, anyway.

Hell Yeah, I love me some Sporflix. Awesome.

By the way, when the heck did Sportflics become Sportflix? 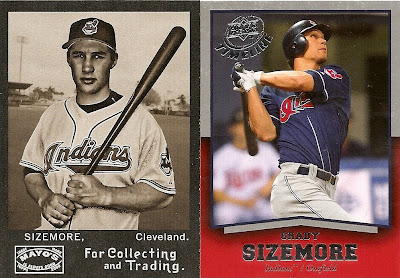 If I remember right this Mayo product got slammed a few months back when it came out. Something about a lot of the players and autos that were supposed to be in it weren't, which I guess is a big deal. (I'm not being a smartass here, that really is a big deal). It's a shame, From the looks of this card the set could have been awesome. This is a really fantastic looking card.

Does this card look cool or what? Look at that pose. Grady's awesome. Love that guy. He'll get it going here pretty soon.

Thanks very much Beardy.

I'll see you soon in the Turk Off. I hope you don't think that sending me these cards means I'm going to take it easy on you. You're going down man, sir.
Posted by Motherscratcher at 8:03 AM

That Sizemore mini is also the no numbered variety, which is a SP, so cherish it!

You know, I rbered that you said something about the Sizemore having been a short pfint and I was pretty sure that it was the mini. I erased that email from you so I couldn't remember for sure. I couldn't find any info on Beckett and I'm just not a savy enough collector let to really know about this stuff.

So, they made some cards short printed and those cards don't have numbers?

Yeah, I just whipped it out and it doesn't have a number on the back (not that I thought you were lying). Cool. Like I said, I thought I remembered you saying there was something about that card, I just didn't know what it was.

Thanks again. I'm going to find more stuff about this card.

I think they're limited to 250 copies, but don't quote me on that.