Here's more stuff from Dubbs over at Cheese and Beer. I keep seeing his name and blog come up on other sites so it looks like people have caught on. The chances of anybody reading this blog that isn't already reading his blog is very small. Never-the-less, if you are the one person who hasn't been there...GO RIGHT NOW. Come back and read this garbage later.

Let's see what else I got from Dubbs. 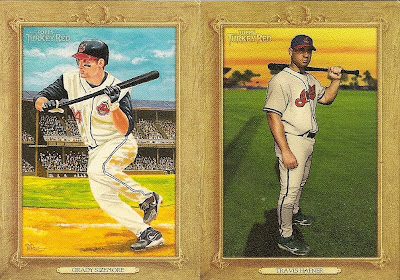 I'm starting all of these posts with Grady Sizemore cards for one simple reason. Grady Sizemore kicks ass. Look at it. How feakin' awesome are Turkey Red cards?

Do you want to know something crazy? Grady only got into the lineup in 2005 because of Juan Gonzalez's steroid use. It's true. By 2005 Juan was back with the Tribe. He actually got the job out of training camp. Sizemore was on his way back to AAA. Juan got hurt and Grady got called up to start the season. The rest is history...or maybe not.

Juan got healthy again and got his chance on April 11. First at bat, Juan injures himself again running to first base. I guess his body had just given up on him after all of the abuse.

Either way, Grady never gave up his spot on the field again. As far as I'm concerned he's the best player in the league. I wouldn't trade him for anybody.

And, another Turkey Red card. I just wanted to start out this post by proving how freakin' awesome these cards are.

The back of the card tells me that Pronk hit for the cycle on Aug 14. I guess they are leaving it up to us to guess the year. Hard to fathom. I have a tough time picturing Hafner setting down that piano he's always lugging around long enough to make it to third base. 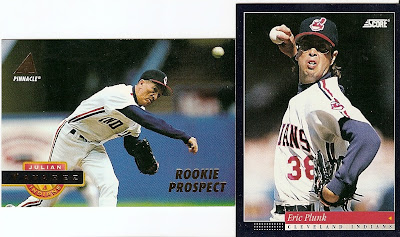 Good lord would you look at how ugly this guy is?! He's uglier than Otis Nixon, and that's saying something. He's even uglier than...

Plunk's not quite as ugly as these other guys, but nobody's giving him $10 for coming in second in a beauty contest either. I remember a passage from Ball Four. It was something about a girl one of the players was with looking like Joe Torre with tits. This is obviously not a compliment. I have the feeling that Eric Plunk may be the modern day, or at least early 90's version of Joe Torre. I wonder if when any of the fellas laid into a slump buster, they told their teammates the next day that she looked like Eric plunk with tits.

I've heard way to many stories to bet against this particular scenario. 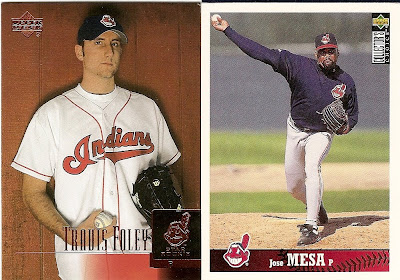 This isn't that long ago and I have no idea who this guy is. I've never heard of him, and I pay attention.

I want to know why he looks so serious in this card. What does he have to be worried about? Whatever. He's already my second favorite Foley of all time. My favorite is obviously Axel. Travis has a lot of ground to make up is he ever wants to make it to the top of this list.

Unfortunately, he does look like the kind of guy who might fall for the old "banana in the tailpipe". For those of you who don't get that, it was in no way, shape, or form dirty. I promise.

Sorry. My therapist says it's good for me to let my feelings out. 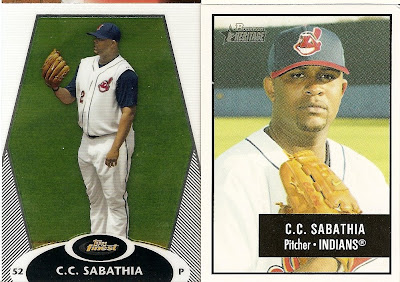 I'm so sad. I watched CC grow up (and out) into the dominant pitcher he is today. I have no hard feelings about him leaving. Who wouldn't take $160 mil? It makes me sad to think that he will probably be booed when he pitches in Cleveland. I don't want it to be that way, but it likely will be. I hate to admit it, but Clevleand fans can act very much like 14 year old middle school girls who've just been dumped. So, I'll have to sit there and be embarassed as we boo a pitcher that gave us his heart and soul for his entire career, as if he somehow owes us something.

And, now I have to chose between wanting CC to win, and the Yankees to lose. As my favorite Nihilists would say: "Eeets naught fair". It was so much better when he was with the Brewers last year. At least he was in the NL and playing for a team that I've always liked. I could enjoy the incredible display he put on the last half of last year, even if I was a bit jealous.

Now, I have no idea how I'll feel about the whole thing this year. I just don't want him booed. He's too good a guy and he doesn't deserve it. It would really make me happy if Cleveland proves me wrong on this one. 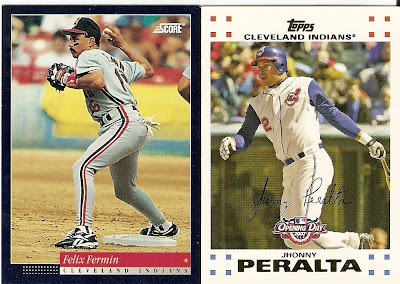 Felix. The Gato. Gato means cat in German or something. So Felix was "the cat" at short. He was considered something of a wiz at short in the years he was with the Tribe. I have no idea if the stats bear this out. It's just what we all thought. I remember a lot of people being angry when Felix was traded for Vizquel.

Cleveland. We know our baseball.

Jhonny. Our 3rd baseman who we refuse to play at third base. Check this out:

Our best SS is Asdrubal Cabrera. He plays 2nd.
Peraltas best position is 3rd. He plays SS.
Derosa spent most of last year at 2nd. He'll be at the hot corner.
Yup, we have a pretty decent infield...all playing the wrong position.

Speaking of Jeter, the back of Peralta's card includes a testimonial from none other than Bob Wickman who says: "Jhonny reminds me a lot of Derek Jeter. [He} has a chance to be that kind of guy." I think Bob has a future in used car sales.

Well, that's all for now on another installment of "Let's review more of the free stuff that Motherscratcher got." Thanks again Dubbs. I think I have one more of these Left in me. Hopefully I'll get to that soon.

Posted by Motherscratcher at 8:43 AM

I am laughing out lout at the "used car salesman" comment. My wife particularly enjoyed the COMMENT about the banana in the tailpipe. You sir, truly have a command of the English language.