Blog Bat Around #5. Dayf has presented a topic that on it's surface should be fairly easy to complete. Just give an accounting of your favorite experience acquiring cards or memorabilia. How hard could that be? Well, for me not so easy. Nothing really is coming to mind. I'm hoping as I write this a few things will pop into my head that I can write about.

So, I'll just start with some of my earliest memories and hope that I end up with a post. I'm sure what I'll end up with is a long rambling post about not much of anything that hardly anyone will read in it's entirety.

Right now I can't think of anything other than stories like:" There was this one Christmas that I got a 1984 Topps Mattingly Rookie Card. It was great. The end." But, that isn't very interesting.

The first thing I collected was those old sticker books. I remember the football stickers but not baseball. For some reason I had 1,000 Ed "Too Tall" Jones stickers. I may have had the baseball books as well, but for some reason I have no memory of them. Back then the entire goal was to fill your book. My brother and I would love to accompany my mom to the store because we knew that meant more stickers. You could get stickers and baseball cards at any convenience store that you walked into. 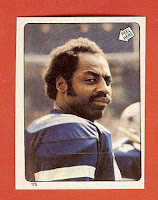 I think we got those books for about 3 years. Most likely 1981-1983. That's my best estimate. It taught me a very valuable lesson. At one point I snuck into my brother's room to look through his pile of stickers and doubles. This was serious stuff, you understand. I found a few that I liked and took them. I don't know how I was found out, but I was. I've always been a terrible liar and I assume that the guilt was written across my face.

By brother came up a few stickers short one day and raised holy hell. All attempts to blame my mother, the dog, or anyone else with means (and not necessarily motive) proved futile. I was dead to rights. Here was my father's solution. My brother and I put all of our stickers into one pile. I got a single double of any sticker that had a double. My brother got all of the rest, despite my protests. Even though we BOTH knew that some of the stickers were mine. I didn't get it then that it wasn't about being fair to me. I'm sure the punishment also included a spanking, which was the single worst thing that could befall me in my youth.

This little escapade taught me a very valuable lesson about stealing. Don't, under any circumstances, get caught. 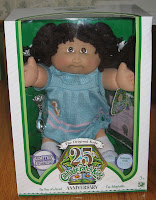 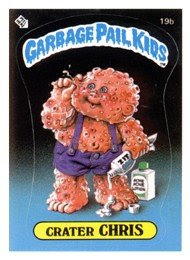 I didn't get it. I thought they sucked. What the heck would I want one of those for? Do I look like some sort of Pansy or something? This didn't stop my mom from getting my brother and me each one. I think it was the thrill of the chase for her. She may have thought that once we had it we would come around. Well, we never took them out of the box. They just got kicked around in the attic or basement. Out of sight, out of mind.

Guess where they are now...nobody knows. They're lost. Can you imagine? An original Cabbage Patch Kid in it's original packaging? It was always there, just something that occasionally got in the way when you were looking for something else. Then, like Keyser Soze, it was gone. Man, the value of that thing would probably dwarf my entire collection, and my collection includes the complete factory sets of 1986-1991 Topps, so that's saying something. 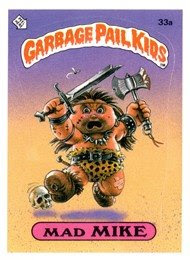 I know that has nothing whatever to do with baseball cards or collecting, but I'm just typing here. And, besides, the rules did say memorabilia.

Anyway, I told you that story to tell you this one. I had no interest in the Cabbage Patch Kids, but that doesn't mean I wasn't aware of them. I'm not an idiot. You're not dealing with morons here. Like I said, I just thought they sucked, especially for a boy. So when they came out with Garbage Pail Kids in 1985, now that was something that I could get behind.

I was in love with Garbage Pail Kids. I HAD to have them. Not only were they hilarious, they also conveyed to my mother that I was in fact A BOY and the Cabbage Patch Kid was the wrong thing to get me. But you couldn't find the damn things anywhere. They would sell out immediately. My mother must have put in hours (I'm not kidding) calling and driving places with my friend's mothers in the hopes of getting them.

Well, mom, as usual, came through with a whole box. I could barely contain myself. My friend Chuck was there and we ripped into them. Mad Mike, Up Chuck, Drippy Dan, Crater Chris...these were all my friends. I It's probably the happiest I've ever been to get something card/memorabilia related. Thinking back about it, I can't believe the stuff that Topps got away with. They would take the same picture and put another name on it and wallah...new card. It would be like if they used the same picture for Adam and Andy LaRoche. Wait, what? Oh. Never Mind.

I saw about 8-9 months ago that a box of unopened series 1 Garbage Pail Kids (not the UK version) went for $1,600 on Ebay. Holy crap! I think back to how great it would have been if I had just put that box to the side and still had it now. Then I think: "Did I get $1,600 worth of fun out of opening that box?" You bet your sweet ass I did. 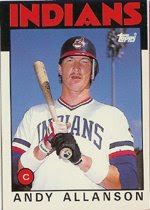 I can't say for sure but maybe it was the Garbage Pail kids that got me into baseball card collecting to begin with. Sure, I had some cards, but I don't remember really collecting until 1986. That's when I first heard of Beckett. Then I was ruined for the next 5 years with dreams of hitting it rich with my collection. I'm sure that isn't anything out of the ordinary.

Because of that I have a special place in my heart for 1986 Topps, otherwise known as the ugliest/laziest card set ever produced. But the last specific story I wanted to talk about happened a few years later in the magical year of 1989. 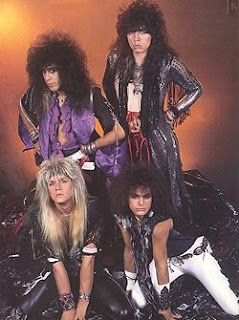 It was late winter. Cinderella was on the radio, Richard Moll was on the TV, love was in the air, and my right foot had started to hurt like a son-of-a-bitch. I noticed it on monday. By friday it was almost unbearable. So much so that I nearly got into a fight with Tammy, a girl who undoubtedly would have removed my ass and handed it to me. My friends and I were going to my house, and then up to watch the wrestling match at the high school. 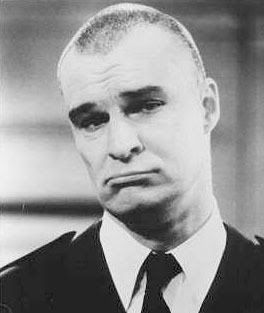 I had been complaining all week. My mom, begrudgingly, took me to the Urgent Care. They diagnosed tendinitis and gave me some pills. I lived with it. 2 days later everyone piled into my dad's conversion van (this thing was awesome) and we headed to a huge card show. I limped around it for a long time until I couldn't take it anymore. I had to go out to the van and lay down. That must be when my mom really stated to think "maybe this kid isn't faking it". I really don't blame my parents for not really believing me up until then because I had really established my self as something of a pussy by then.

This is such a strong memory because of what all of my friends: Chuck, Chris, Dan, and Doug did. They kept coming out to give me more cards and packs of cards. Some fairly expensive. The stuff just kept coming. I didn't ask how they got some of them, but I suspect they were adhering to the lesson that I learned in the "football sticker book affair" as it later came to be known. It really was kind of cool, getting all of that loot for no real reason, and it's why that show sticks out in my mind more than any other card show that I attended or any other thing that has happened when collecting, and far more than when I got this or that specific card. 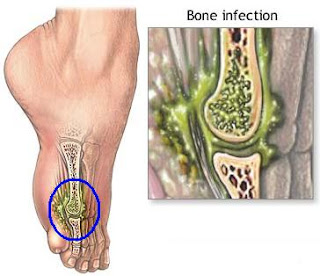 Just to wrap up that story, because I know you will go out of your mind if I don't (it's so damned interesting) I ended up in the hospital. After trip to the doctor the next day I was sent to Cleveland and admitted to the hospital. I had osteomyelitis in my foot. They damn near had to amputate (seriously). I was in there for around 2 weeks. I got so much shit it was like Christmas every day. I can't imagine the piles and piles of presents I would have gotten if they had actually taken my foot. It might have been worth it.

Well, I suppose I've rambled on for far too long, as usual. None of my stories are particularly interesting, unusual, or groundbreaking, they're just what I have. And they're better stories than the time a few months ago I sniped a Shin Soo Choo auto off ebay for around $5.

For anyone who stuck with me to the end here I have 2 things to say.

Your story just made me realize that the only time I was in the hospital as a kid was when I had my tonsils out and it was before I even started collecting cards.

So I didn't even get any cards for being sick. I got lousy popsicles and ice cream. And a coloring book.

What good is being sick if you can't milk it for free cards?

man i hate night court. aside from that, great post!

i've still got a few o.g. garbage pail kids cards laying around somehere. There's something about 86 topps...i can't explain it really, but i've always liked it.

You had me at Hello.

I remember the garbage pail kids, and the movie was freakin awesome. We weren't huge into the cards, baseball was our taste of tea. The names, though, were oh-so-clever, and it was a refreshing point in time when that Ugly Kid Joe album came out w/ the garbage pail kid statue of liberty cover. Nice.

I don't know how I missed this when you first posted it, but it is hilarious (as stories of other people's pain often are). What a great story of childhood memories, the toys are parents wanted us to have, and of nearly losing an appendage!

You actually make it seem so easy with your presentation but I find this topic to be really something which I think I would never understand. It seems too complicated and extremely broad for me. I’m looking forward to your next post, I will try to get the hang of it!
skip bin hire darra
skip bin hire online