I see these in the Giant Eagle. Can't remember if I've seen them in Target or Walmart, but I think so. Somebody must buy them, right?

Well, add me to the list of somebodies. I couldn't resist anymore. My wife sends me to buy formula and they never have any new cards. Ever. But, they always have plenty ot these stupid things. I knew it would be a bunch of crap, but I figured I'd spent more than $10 on more worthless things. Everyone who's seen these things has wondered what's in them. So, I did the dirty work for all of us. I figured I'd likely be the only one of the Blog People to be so foolish. Maybe it's a gold mine. Maybe everyone should be snatching these up. Read on if you wish to find out what you've been missing. 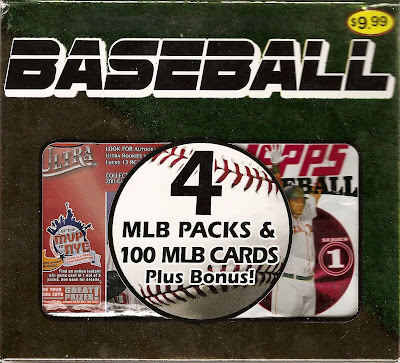 Here's what you get:

I don't really get the whole bonus thing. Are they selling some of these things without the bonus pack? I seriously doubt it. But that's the only way that this is a bonus. It would be like a used car lot selling cars by saying that all of their cars have 3 wheels plus 1 bonus wheel. What a deal. 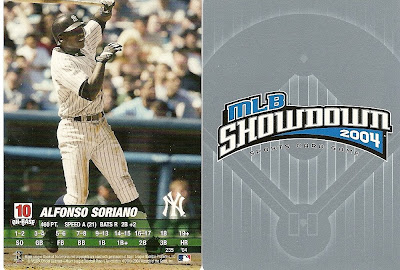 Might as well start with the awesome bonus (that you get as part of every possible box). I don't know what this game is. The pack didn't come with any type of directions or anything so I have no idea how to play.

The cards themselves aren't too bad, even if they are filled with useless gibberish. The only interesting thing is that the Sheffield card is shiny like a refractor and there is absolutely no explanation why. The corners are rounded so you don't mistake them for ordinary baseball cards.

If anyone wants these leave a comment. I have no use for them. 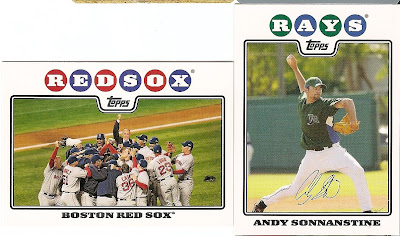 Here's what I pulled out of the 2008 Topps pack. I like Andy Sonnanstine because he comes from my neck of the woods. We don't have many ballplayers make it from Ohio so I try to pay attention when we do.

The other one is that Red Sox card where they airbrushed Giuliani. Kind of cool to pull it only because it got so much press and I hadn't actually seen one before. Yippee. 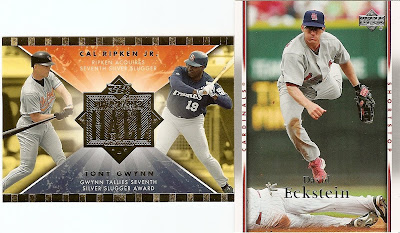 2007 Upper Deck Pack: Look how gritty Eckstein is. He just oozes grit. He must be good, considering all of that grit. Stats be damned.

The other is a card I hadn't seen before. Ripken and Gwynn Road To The Hall. It's nice and shiny and gold. How many insert sets must there be commemorating things like future Hall Of Famers and whatnot? I think they should make a Road To The Buffet set with players like Gwynn, Mo Vaughn, Cecil Fielder, Kirby Puckett, etc. Tell me who wouldn't want that.

Somebody should put me in charge. 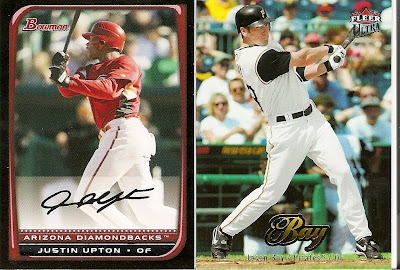 2007 Ultra: That pack was fairly uneventful...hence the Jason Bay

Now let's get into a few examples of the random cards smushed into this box. There was a real wide variety with the majority being from the "vintage" late 80's. There is other stuff, though.

You can't tell from the scan but these are actually mini cards. They are from some 1988 Topps set. They're pretty cool. I hadn't seen them before. The condition of the Vince Coleman card was the exception rather than the rule. Most cards were in decent shape. I like these. I'm going to look into this set.

Did you know that Barry Bonds majored in criminal justice while in college? I didn't. I find that strangely fascinating.

Also on the back is the "Talkin' Baseball" feature. Example:
"The "H" category indicates the number of hits a batter has achieved. A hit occurs when the batted ball falls safely permitting the batter to reach base."

No shit? Now they tell us.

1991 Collegiate Collection Robin Ventura. This is pre getting his face punched in by a grisled old man with the red ass. That was great.

1990 Somethin-er-other Adam Casillas. Don't know this guy but I like these old minor league cards. I wonder what happened to old Adam here. There's one thing I do know. If it was me, and they were taking my picture for a card, I'm losing the turtleneck. At least for the picture. If you want to look tough a turtleneck might as well be a fanny pack.

2002 Upper Deck MVP Dewon Brazelton. I don't know who this guy is but that is a kick ass looking card. I got 2 of these.

2002 Ovation Brad Radke. I always liked Radke. He was like the Twins Charles Nagy. Never a superstar but pretty good for a lot longer than people would think. I'll bet Twins fans love this guy.

1990(?) Somethin-er-other Ramon Romero. I just had to show this card. Is that the best they could do? Really? It looks like some photo they would show on America's Most Wanted or one of those shows where a guy goes missing and nobody's quite sure what happened. In fact, I'm not so sure that isn't the case here. What the hell do I really know about this guy. Nothing, that's what.

1981 Donruss larry Cox. I used to have one rule: I don't date girls who say "bitchin'". Now I have another. If I get a card of a Dude named Larry Cox, it goes up on the blog.

1989 Topps Monty Fariss. This is the trifecta right here. Monty, Larry, and Burt. I think Monty has tremendous upside.

1987 Topps Carl Willis. How about that...the pitching coach used to be a pitcher. And he sucked.

2004 Fleer Inscribed Khalil Greene. I like the look of these cards. Not sure what inscribed means, though. Hey, he's from Butler PA. How about that. I never thought a dude from Butler could possibly be named Khalil.

1990 somethin-er-other Ricky Ward. My only regret right now is I didn't scan the back of this card. It is staggering in its complete and total lack of anything interesting at all. It's like they went out of their way to provide no information on poor Ricky here. I wonder if that is standard throughout this set, or if this guy really is that uninteresting. For God's sake his position is "infield". This is the laziest card I've ever owned.

The biggest feature on the back of this card is a logo for Anheuiser Busch Company Eagle Snacks.

1984 Topps Mike Scott. I can never see a card of this guy without my brain immediately shouting "1.21 GIGOWATTS!" My brain has a mind of it's own. I can't do anything with it.

1991 Stadium Club Team USA Paul Shuey. Paul was the first big draft pick that I can remember the Indians making. For some reason not all draft picks resonate in my mind. Paul was supposed to be incredible. He never did make it that far, mostly due to injuries. He did have some good times.

And, he's from Lima. Another Ohio boy. You know who else is from Lima? You guessed it...Larry Cox.

Last but not least: 1991 Pacific Nolan Ryan. The only Ryan card I own (as far as I know. I didn't actually look) that features him swinging a bat instead of pitching. Personally, I want a card of him beating The 1980's Player of the the Decade's face in. Until that card is produced, this one will have to do.

Boy, would you look at that ugly ass card?! Pacific sure started out rough, didn't they.

Well, I hope that was somewhat informative on what to expect from these ridiculous things. Obviously, nobody is sticking Rickey Henderson Rookie cards in these things. But do I think I got 10 dollars worth out ot it? Yeah, I think it was worth it...once anyhow. I think they used $10 worth of glue just closing the damn box. Check one out. You'll see what I'm talking about.
Posted by Motherscratcher at 8:48 AM

Where do I begin...Is this your homework, Larry? Once again, your blog inspires me to continue reading your blog. Your posts aren't the drab and watered down...or "clevelanded" as I like to say...like most others who post for the sake of posting. Your posts are the stuff made of legends. Of insight and love of the game. Of guys named Larry Cox.

Crew destroyed your Tribe yesterday, we only played 2 starters against your 4 of 5. Condolences.

I bought one those 10-dollar things and made a post out of it as well.

I didn't have nearly the same luck as you did. Well worth the 10 dollars for you.

Thanks Dubbs. As much as I like to say that I only post to amuse myself, I still love when I get comments. I really appreciate it. I dig your style too, dude.

Night Owl, when did you post it? I'd like to see what you got. I'll update this post and put a link to it for all of the people out there clamoring for more info on these.

Oh, and Dubbs...yeah, what can I say about that game. At least our Cy young winner only gave up 2 runs in one inning and our returning $14 slugger made 2 outs in 5 pitches. Let the good times roll.

Ah, it turns out it wasn't the 10 dollar box. It was a 5 dollar one. Which explains why I wasn't as successful.

It's pretty bad when I can't even remember a post I did two months ago.

Would love that Red Sox card, Larry, if the offer's still open.