Back in January, Thorzul (who rules) had a five dollar group break of a whole bunch of stuff. I was unaware of this at the time. I only got in at the end. There were 9 teams left over and Thorzul offered them for $20. I snatched it up for two reasons. The Indians were one of the teams, and there was Turkey Red involved.

I like Turkey Red for two reasons. Red is one of my all time top 25 favorite colors, and I like turkey.

I guess for me it wasn't a $5 group break as much as a $2.22 group break. I figured I might as well show you a few of my favorite Indians, Turkey Reds, and other stuff. 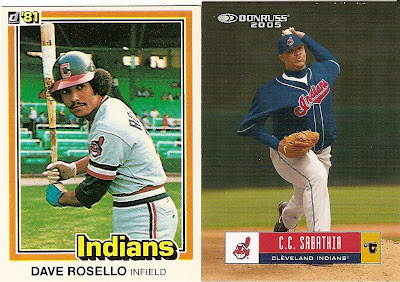 2005 Donruss CC Sabathia. There is a sideways 'P' on this card. I have not been able to figure out what it's for. It looks like it would have something to do with Purdue but I don't get that CC connection.

Maybe, and stay with me on this one, it DOES stand for Purdue, but instead of the university, it's the chicken. CC obviously eats a lot of chicken. There you go. Mystery solved. I'm like Marge Gunderson over here.

I wanted to show a CC card because of all the crazy synergy, or symmetry, or synergism, or something between me and Thorzul.

1. We both like baseball and baseball cards.
2. We both have a favorite team, just not the same one.
3. We both got to root for CC Sabathia (hence the card up there)
4. Thorzul is an elementary school teacher. I once attended elementary school.
5. If you add up all of the letters in "Thorzul" and "Motherscratcher", then you add 1 letter to honor the Hebrew God of Ryan Braun, you get...THE NUMBER 23!!!!OH MY GOD!!!!

Also I wanted to show you this Dave Rosello card for no other reason than I like it. Dave looks like a swingin' cat. He should have taped the other end of his bat, though. 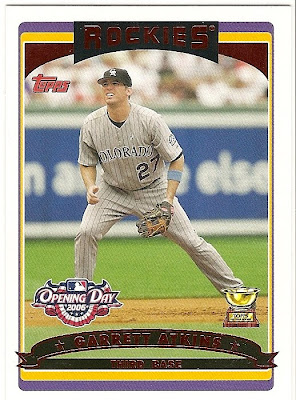 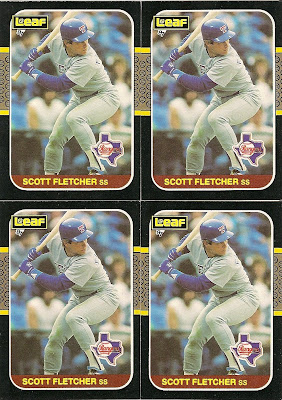 I don't want to mislead anyone into thinking I made the decision about this purchase lightly, without considering all of the consequences and ramifications. Prior to sending in my $20, my wife and I sat down with our pie graphs and spreadsheets to discuss the matter. We poured over all of the available info for hours. We finally came to the conclusion to buy. Here is the conversation that put us over the edge:

Me: There will be some 1987 Leaf cards involved.

Wife: Are the Rangers one of the teams?

Wife: Well, is Scott Fletcher one of the cards?

Me: How the hell should I know?

Wife: Can't you send this Thardzing fella an email?

Me: I just don't know if we have the time. We have to jump on this deal.

Wife: I guess you're right. I think it's worth it if we can land 2 Scott Fletchers. Less than that and we're getting screwed. Are you feeling luck?

As you can see, it all worked out, and then some. 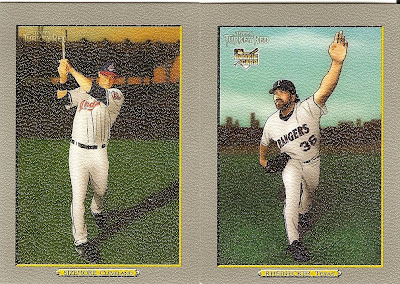 Here's the Grady Sizemore Turkey Red. Whenever I get a Sizemore I have to put it on the blog.

The other is John Rheinecker. I don't now who he is and I have no idea what the heck is going on in this card. He appears to be looking at some tomata sitting between third and home. He's already released the ball to leave it sailing over the backstop. Or, he's practicing slapping high fives with his ginormous hand. 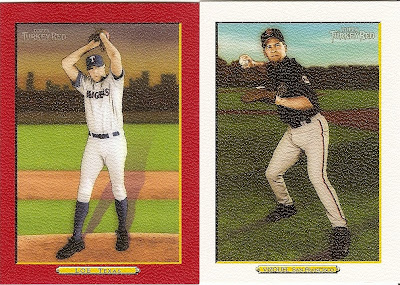 Here are two Turkey Red Parallels, one red, one white. These are the first examples that I have in my collection. I think they look pretty sweet. And one of them is Vizquel. Not too shabby. 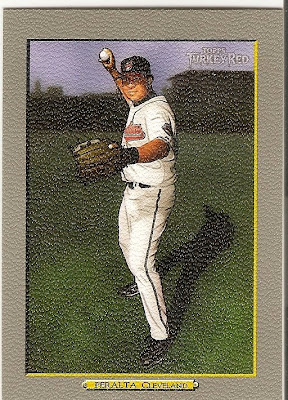 Jhonny Peralta. This is up here for 2 reasons. One, he's and Indian. Two, this is a short print (I think). I guess that means that this card wasn't made as much as most of the others for some reason. Whatever. Looks the same to me.

Jhonny spells his name wrong. I have no doubt that Thorzul picked up on this, being an educator and all. The story I heard is that his parents wanted to name him Johnny but his dad spelled it wrong on his birth certificate. I choose to believe this story. 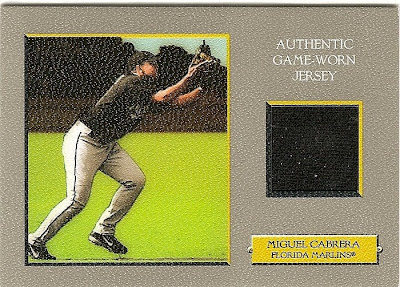 Miguel Cabrera Jersey card. This is the only jersey card I have in Turkey Red. Good player. Nice card. Sweet deal.

Thanks Thorzul for the loot. I don't care what Dayf says about you in his emails, I think you're a good guy.
Posted by Motherscratcher at 8:32 AM

I already say all those things to Thorzul to his face anyway.

And the '23' thing was waaaaay to deep for a monday morning. Yes, 1pm is morning in my world.

If you look at the Fletcher cards and cross your eyes, doing that 'stereoscopic thing', he looks 3d... just sayin...

code: larfer - I have no idea what that has to do with anything.

I like the 1981 Donruss Indians cards so much I almost became a fan.

Joe Charbaneau was the next Mickey Mantle or whatever and cleveland was hosting the all-Star Game ... but then the strike happened.

Still like the dingy old ballpark look of those 1981 Indians cards.

I dunno if your wife has a sister or anything, but I may have married her. The conversations you have about worth and value, and sending that thordzall fella have an awful familiar ring to them.

maybe it's just me.