God only knows how long ago Baseball Dad sent me a stack of cards. Some were from his group break, and a lot were just a bunch of great Indians cards, a huge variety. I limited my haul to enough cards to make about 4 posts. The plan is to always knock out those posts and get them up on the blog as a proper thank you.
With me it never really works out that way. I try to think of something semi-interesting to say about all of the cards. The problem is, since I'm an Indians collector, I get a lot of the same players. It's hard to think of a lot of different things to say about Cliff Lee. I end up repeating myself a lot.
What happens, then, is I scan the cards into different posts waiting to be commented upon. Then those posts sit there and sit there. This week is all about getting caught up and finally posting those things. And that's how I end up posting about cards that Baseball Dad sent me a year ago.
Here's the first post about these cards...way back on Dec 13.
Notice at the end of the post that I promised to get to some cards that Night Owl sent me. I made a crack about checking back in March. At the time I thought it was ridiculous to think that it would take me until then. Oh well.
Here is the second installment of the Baseball Dad cards: 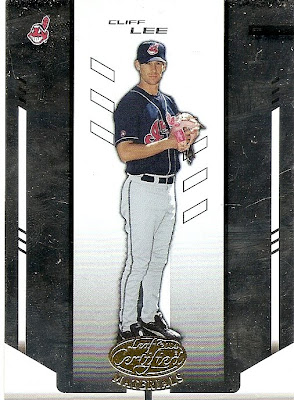 Cliff Lee 2004 Certified Materials
Speak of the devil. It's CPL in the flesh. Well, not in the flesh. On a shiny piece of cardboard. I was always behind Cliff. I didn't hold it against him that we wouldn't be able to afford him and had to trade him away. It's the way it is and he earned the money.
And then, after the trade, he said some not too nice things about the Cleveland fans. I don't want to get into it here (It deserves it's own post if I ever get to it). Suffice it to say that it is partly my own fault that we haven't won a World Series in Cleveland.
Well, awesome card aside...Cliff Lee can kiss my ass. (My apologies to Baseball Dad who I know frowns upon that sort of talk. Just take solace in the fact that the actual verbiage in my head is much more colorful.) 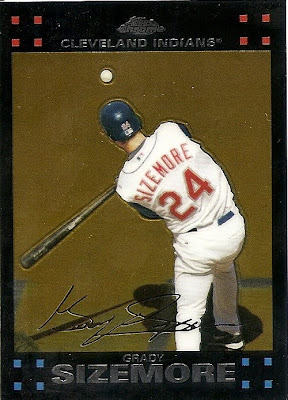 Grady Sizemore 2007 Topps Chrome
On to happier things than Phifer Lee. This great card combines my 2 favorite things in card collecting. Chrome and Grady Sizemore...Cleveland's beloved star player still remaining in town. I think he is primed for a breakout year. I made sure I got him on my fantasy team. 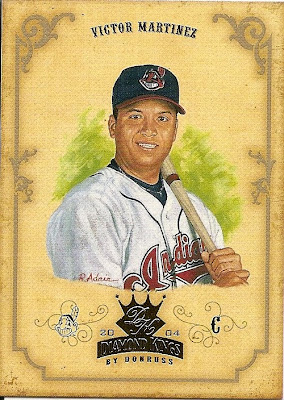 Victor Martinez 2004 Diamond Kings
Now here's a former player that I can get behind, despite the fact that he's now a Red Sock (Sox?). Victor was great when he was here and I wish him nothing but the best. Victor never wanted to leave to begin with. I still hope he can, down the road, finish out his career in C-Town. It seems like the right thing.
These Diamond Kings cards are great looking. Much better than the version that was put into the late 80's cards. I miss Donruss. 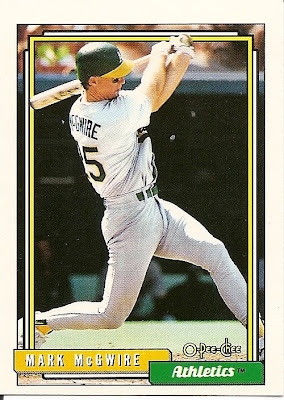 Mark McGwire 1992 O-Pee-Chee
Look how skinny this dude used to be. Those roids really made him into a monster (physically speaking. I actually like McGwire as a person.) I know I'm in a very small minority, but I like McGwire and I no longer care about his steroid use.
I don't want to get into that, though. I only bring it up to say I legitimately love this card. I love it because that's a perfect swing right there. And steroids didn't give him that swing. 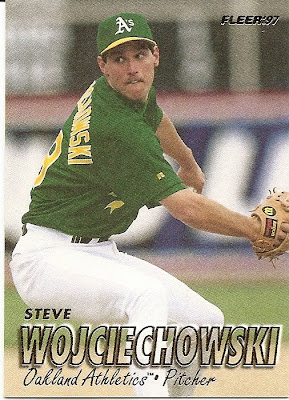 Steve Wojciechowileskichowskinuberchinowski 1997 Fleer
I picked this card for a few reasons:
1. I'd never heard of him. So it gave me a chance to look him up. He wasn't good. No...not at all. He did have more strikeouts than Home runs given up, though. So that's a plus.
2. I wanted to see if I type in his name without looking at it 5 times. I could not.
3. The clinic director of my residency program had a very similar name. I couldn't spell his, either. But he's a really cool dude,and that's what matters. 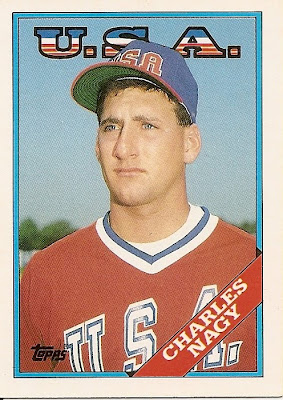 Chuck Nagy 1988 Topps Tiffany Traded
We interrupt this review to tell you what I'm watching. The Cavs are playing the Kings today and it's Z's first game back at home as a Cav. Cleveland loves Zydrunas. Zydrunas loves Cleveland. I'm glad he's back.
I just watched the pregame intros and Z got a reception that gave me chills. A really nice moment. Cleveland will shower it's guys with love if they let us. 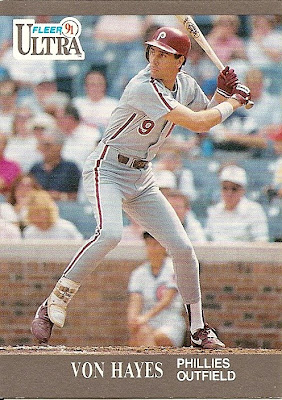 Von Hayes 1991 Fleer Ultra
I hope there's nobody out there who thinks there was a chance I would get a card of a guy named "Von" and post it. Von Hayes was a good player, but not as good as his name. He has a Hall Of Fame name. 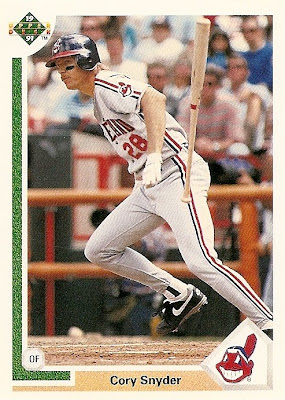 Cory Synder 1991 Upper Deck
This card was made after it was plainly evident that Cory Snyder was never going to be the player that once looked inevitable. I still don't know what happened.
He still looks great, though. 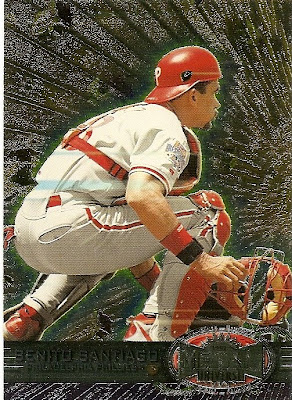 Benito Santiago 1997 Metal Universe
Why in the world don't they make cards like this anymore/ Look at how completely awesome that card is. I don't necessarily feel one way or another about Benito. He strikes me as a player who was never really as good as we thought he was. I remember Benitio being very highly thought of. It's not that he was bad, but I doubt he was ever really great. I'm ready to stand corrected about that because I don't feel like looking him up right now.
But this card sure is great. Look at all of the awesomeness going on there. I wish they'd bring back Metal Universe.
That's all for this edition and there's more to come. Thanks Baseball Dad. Many thanks again.
And Night Owl, you shouldn't have to wait any longer. In fact I might have already posted some of yours. I'll bet it's April, though. Sorry I missed my March deadline.
Posted by Motherscratcher at 8:46 PM

I agree with you on McGwire he is and always will be one of my favorites. I like the OPChee card I need to start trying to find these for my personal McGwire collection!

Yeah, If I remember correctly it was from your group break. (You did a group break, right?) There were a bunch of Indians stuffed in with the group break cards.