This is the result of a trade with Slangon over at Condition Poor. Condition Poor is one of those blogs that, as you know, is better, more interesting, and updated more often than my own. But, as is often the case, Slangon got swept up in Turkoff Fever last year. Despite the fact that Beardy owned me in the Turkoff, I still was able to make out. How?
I'm glad you asked. I was able to turn one of my relics into a sweep Grady Sizemore relic. You see, for some strange reason Slangon is a Mets fan. (Yeah I know, I don't get it either. But there it is.) He was willing to send over the Sizemore in exchange for some dude named Jose Reyes.
I know.
But, who was I to argue? And not only that, he sent extra cards too.
Here they are. Or here are some of them. It was so long ago that I can't remember if this was everything or just a sample. I suppose it doesn't matter too much, does it. 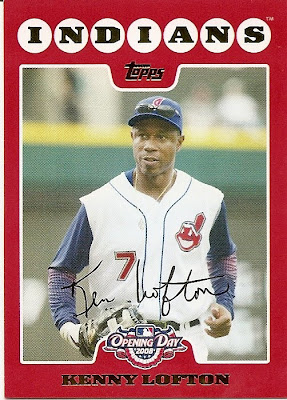 Kenny Lofton 2008 Topps Opening Day
You want to know shy this card is red? It's because Kenny is so fast, that when he runs he sets shit on fire. This set was originally supposed to be green, but the cards turned red as soon as they made the Lofton card.
True Story. 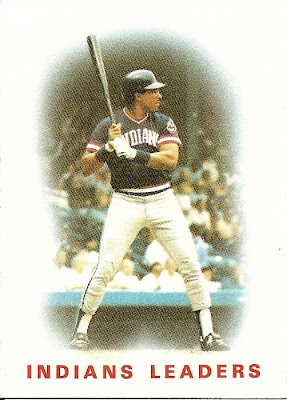 Andre Thornton 1986 Team Leaders
I still don't now what to make of this card design.
I played baseball against Andre's kid when I was in high school. If I'm not mistaken he played for West Geagua. I remember the rumor going down the bench that the big guy was Andre Thornton's kid. This isn't too long after Andre was considered an Indian's slugger of mammoth proportions.
I don't remember the kid being all that good, though. I'm not saying he was bad, just that he wasn't any better than any of the rest of us. Which was some how a little disappointing, even though he was on the other team. 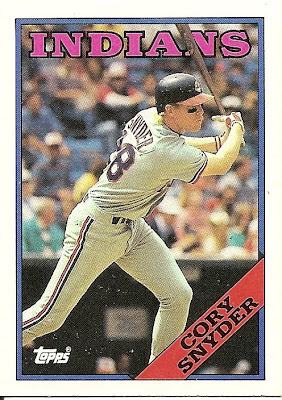 Cory Snyder 1988 Topps
Says here that Cory was signed in 1984 by scout Edward Lee Bane. I'm not sure how long Edward Lee Bane was a scout, but he hit a home run with this one. One of my all time favorites. If I ever find Ed I'm going to shake his hand.
The first place I'll check is jail because Edward Lee Bane sounds a hell of a lot like a "lone nut assassin" to me. And if he isn't in jail I need to find out where he is so that I can avoid walking by any tall buildings in the vicinity. 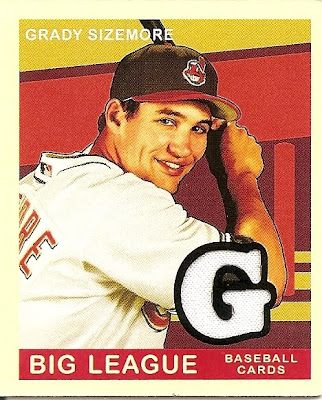 Grady Sizemore Game Used Relic
This is the reason for the trade. Pretty sweet card here. I have big plans for Sizemore this season. He had a good spring and the word is he look healthy for the first time in a long time. Unlike the media, I have not given up on this team. I think we're going to surprise some people this year.
Well, that wraps 'er all up. Thanks Slangon. Nice cards. We'll have to do it again as soon as I get everything organized and up to date and will allow myself to start trading again.
Posted by Motherscratcher at 8:43 AM