OK here's what I've got. There was a stack of cards with these 2 in protective hard covers. the stack is about 20 cards or so and it features a mishmosh of players, sets, and teams.
I have no idea where I got these.
I can guess. And I think I'm right, but I might not be. Who knows? I think they are from Thorzul in one of his breaks. I don't know if it's the same break as I posted earlier or another one, but I'm pretty sure that's where their from. I think that because the Dan Haren card I think is something that Thorzul threw in there for me from his own personal collection for reasons that seemed to make some sense at the time (although it was unnecessary). 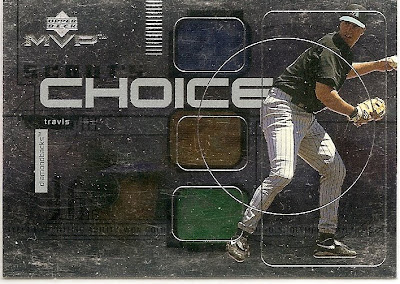 Travis Lee 1999 Upper Deck Scouts Choice
This isn't a great card but it looks a lot better in real life than it does in that scan. It's got an Orwellian feel to it that's a little disturbing, but hey. 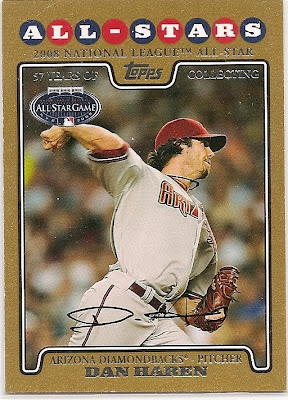 Dan Haren 2008 Topps Gold 1196/2008
I like these Gold variations and I think this is the one that Thorzul gave me from his own collection. Probably because he knows how super cool I am and wants me to like him. I'm used to stuff like that.
I hope that is, in fact, an accurate portrayal as to what actually has transpired in reference to these cards. I thank you again Thorzul.
You do, in fact, rule.
Posted by Motherscratcher at 12:37 PM