Here is another moving installment of the cards that Baseball Dad sent. As usual this is only an exhibition. Please, no wagering. 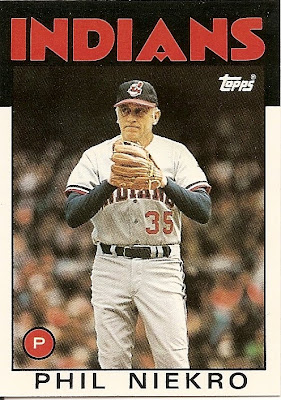 Phil Niekro 1986 Topps Traded Tiffany
At least I think it's Tiffany. I'm not 100% sure. I guess it doesn't really matter. Well, that's not true. It will matter a lot when I go to file it. The thought of mis-filing a card makes me queasy.
Yes, I know I'm a weirdo. What of it?
I know that Phil is probably 46 or so when They took this photo but dang, that is one old looking dude. I'm not THAT far removed from 46 myself. I'm a lot closer to 46 than18, anyway. I sure hope I look a little better than that. Sheesh. 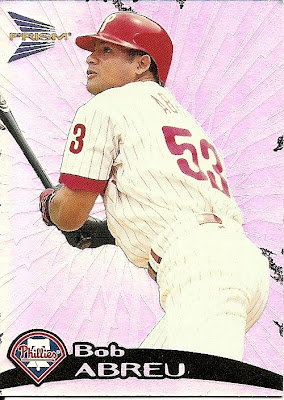 Bobby Abreu 1999 Pacific Prism
This is one of those rare cards that looks a lot better in the scan than in does in real life. In the scan it has that shiny purplish sheen to it. In really life it's just silver. Not that there's anything wrong with silver, it just looks really cool in the scan IMO.
And what's up with "Bob". Dude...you're Bobby...get over it. 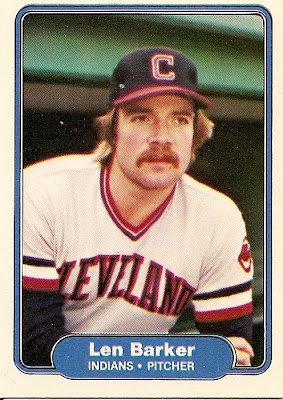 Len Barker 1982 Fleer
The truth is for most of his career Len Barker was average. But on May15th against the Blue Jays he pitched a perfect game. It's still celebrated yearly in Cleveland. One of our few shining moments between 1954 and 1995. It's important. He will always be loved here. And when he was gone, he brought Brett Butler and Brook Jacoby in trade. Barker did a lot of great things for Cleveland.
Even if over the long haul he wasn't a superstar. He was a superstar that day.
And that mustache is anything but average. 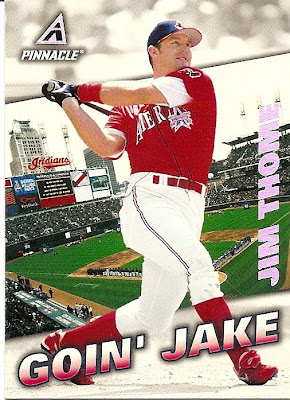 Jim Thome 1997 Pinnacle
Goin' Jake! This card celebrates Jim Thome and Cleveland hosting the All Star Game at Jacobs Field. I remember that. Those were good times for the Indians.
But dang, that is one ugly uniform. 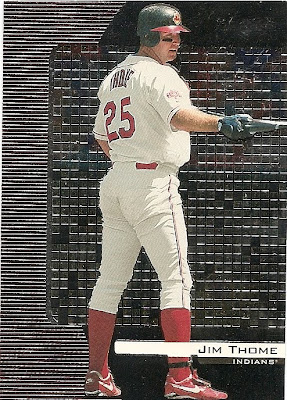 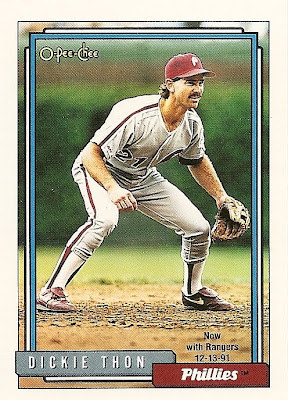 Dickie Thon 1992 O-Pee-Chee
Ever wonder how a grown man lets everyone call him Dickie?
I do. 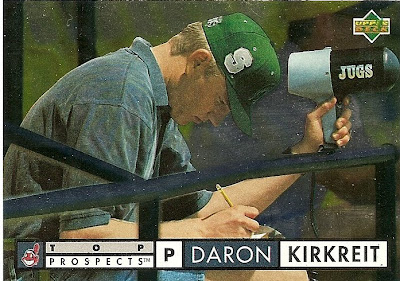 Daron Kirkreit 1994 Upper Deck
Nice Jugs!
(I wonder if that will translate into page hits? I'm not sure how that all works but it puts a smile on my face thinking about all of the 13 year old boys who I may convert to baseball cards when they started out looking for something completely different.) 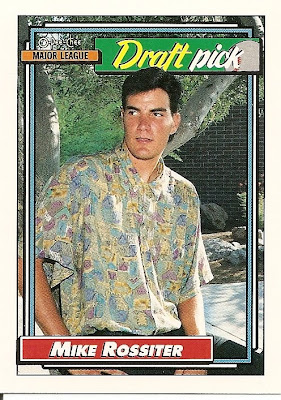 Mike Rossiter 1992 O-Pee-Chee
And there it is. The ugly shirt I promised in the title. Lord is that hideous or what? I can't figure this card out. Why is he dressed like that? Why is he apparently at the zoo? What the heck is he looking at?
It's a shame this guy never made it to the show. Even for a few days. At the very least he could have afforded a decent shirt. 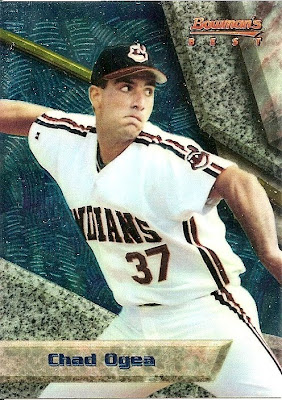 Chad Ogea 1994 Bowman's Best
I became a big fan of Bowman's Best ever since I Am Joe Collector busted some in a group break. It doesn't matter what year, I'm always impressed. I love these cards.
Hey...I guess they really are Bowman's Best!
Huh.
How about that. It all makes sense.
Thanks Baseball Dad. One more coming. I think.
Hell, I can't keep track anymore.
Posted by Motherscratcher at 5:42 PM

Yeah, that's probably a Tiffany, if it's real shiny.The base, traded Niekro books for $.25 so the Tiffany is probably worth at least $.30 maybe $.50 ! Just in case you want to put it in,like a fireproof safe deposit box or something.I knew I sent you some cards but I really don't remember what all was included.Glad you're enjoying them!