Here is another set of Indians cards from the Night Owl. Actually, it isn't so much a set of cards as it is just one card. I gave Grady, as I often do, a card to pick out. I've taught him the delicate art of preserving one's cards, but it has yet to take hold. There's a part of me that hopes it never does.
When Night Owl's package arrived I took out the ones I really didn't want damaged and let him pick a card out from the rest. I hope nobody get's offended by this but I get a lot more pleasure out of watching my kid pick out a card than the 3 cents it's actually worth. I usually sit down at the coffee table to open a new arrival and Grady always comes over to watch. I can tell he wants some of the cards. I spread out a few in front of them and he picks one or two. He then immediately tears off in some random direction while babbling some incomprehensible giberish. He's just like his dad. 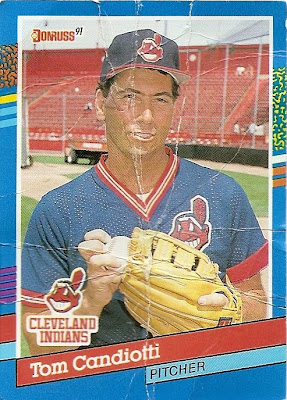 So here is Grady's selection from the cornucopia of goodness provided by the Night Owl. As you can see, he picked a worthy player in Tom Candiotti. Growing up it always seemed like Candiotti was there. He was always on the Indians and he always would be...until he wasn't anymore.
I liked Candiotti and Indian's fans remember him fondly. But I worry that I didn't appreciate him like he deserved to be appreciated until it was too late. In fact I know I didn't. Maybe if I had read Ball Four when I was younger I would have known what we had. I hope the Red Sox fans appreciate Wakefield because a good knuckleballer only comes around every so often and you are lucky to have one on your team.
I'm willing to bet that everyone out there reading this post knows how they grip their own knuckleball. EVERYONE throws a knuckleball. My grip is a lot like Tom's on this card. I've convinced myself that our grips being similar probably had a lot to do with Tom's success.
I had a hell of a knuckler myself, you know. I really did.
So, I couldn't have been happier to see Grady choose a card of Tom Candiotti out of the considerable pile he had to choose from. I like to believe that Grady was intrigued by the unusual grip.
Night Owl I thank you, and Grady thanks you.
BTW - Here's a little known fact about the Candy Man. His middle name is Caesar.
Cool.
Posted by Motherscratcher at 1:45 PM

Great post.
Another bit of Candiotti trivia...he is in the Bowling Hall of Fame.

1991 Donruss has been treated much, much worse in a much more unpleasant fashion.

When my daughter was little I let her do the same thing with some of my cards. Even a couple guys named Tom Seaver and Mike Schmidt.