If you read the last post, you may remember that I have a review about cards from Dubbs that I should have done about 3 months ago. Well, here it is. Dubbs sent me so much cool stuff that it took me 3 posts and about 1/3 of a year to get through it all. 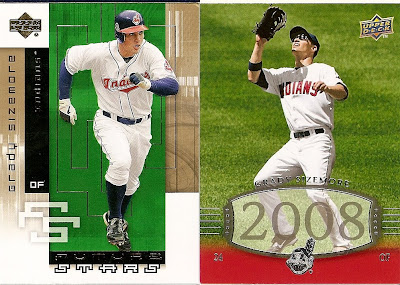 Absolutely no reason not to start this thing off with Grady. I know he's in a slump right now, but I have no doubt he will be tearing it up shortly. I'm starting to doubt if the Tribe will be able to put it all together, though, no matter what Grady does.

The Timelines card celebrates the fact that Grady had registered 4 consecutive 20-20 seasons. Last year he actually went 30-30. Man's a stud. 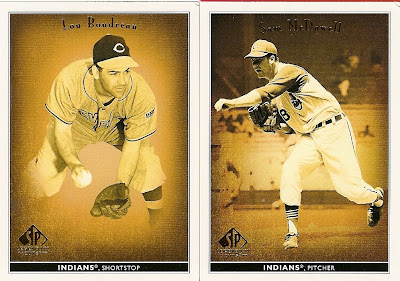 I'm not sure many people realize how great Lou was. In 1948 he was the MVP and led the Tribe to it's last World Series victory. Oh yeah, he was the manager too. He is a Cleveland Legend with his number retired. He played his entire career in Cleveland, except for a few games with the Red Sox at the end of his career. Whatever happened to the player/manager?

If I had to pick one current player to be the player/manager I have no doubt who it would be. Manny Ramirez. Hands down. He even has plenty of time to get it all organized.

Yes, I'm very serious. It would be the best thing to happen in baseball this year. Not sure if Night Owl would agree.

Man, the Tribe had some seriously awesome staffs back then. Feller, Lemon, McDowell, Score...those guys had some real juice. How did we only win one series back then? I really like these Legendary Cuts cards. 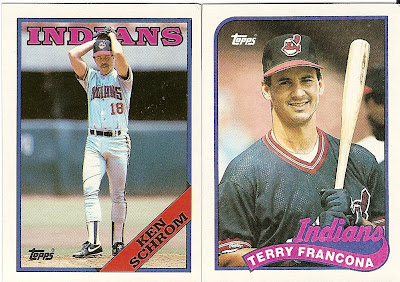 You want to know how delusional I used to be? I remember not understanding why the Indians weren't better when we had guys like Ken Schrom. I really didn't get it. Every year I thought that we would be great.

"Manny’s suspension completely invalidates 2004 and 2007. I guess it is back to 90 years and counting Red Sox Nation."

While I disagree with this logically, and find it unsupportable, I do love it. The fact that someone payed out good money to sponsor Francona's page for the sole purpose of antagonizing the entire Red Sox fan base puts a huge smile on my face. And there's not a damn thing they can do about it. Delightful. 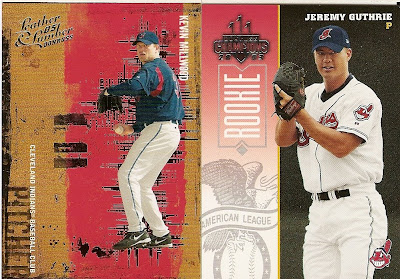 In 2005 Millwood lead the league in ERA on a staff that included Sabathia, Lee, and Westbrook. If only the Indians could have a staff like that hitting on all cylinders at the same time. I think that's been the problem with Cleveland sport. They have had some phenomenal talent at times, they just never have seemed to be able to put it all together at the same time.

You know what makes me think? I'm older than Kevin Millwood.

Guthrie was the 2002 Pac-10 Pitcher of the Year and was drafted by the Indians with much fanfare. He was going to be the next success story like Sabathia had been. 5 years later he was put on waivers and claimed by Baltimore. I didn't understand it then and I don't understand it now. He was given very little chance to succeed here.

He's been, for the most part, very effective in Baltimore who plugged him straight into their rotation and left him there.

The Indians? They have given 37 starts to Jeremy Sowers since the start of 2007. He has left me underwhelmed. 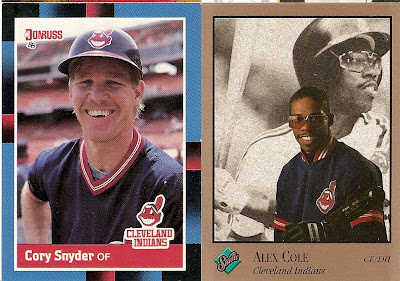 Look at that dude. Cory Freakin' Snyder. How could you not love that guy?

I love love love this Alex Cole card. Look at those glasses!!! And, the back has no stats, just biographical info! Here's a sample:

Favorite actor is Wesley Snipes; movies are House Party 1 and 2; talk show host is Montel Williams; would like to meat Wesley Snipes.

Ignoring the glorious fact that his favorite movies are House Party 1 and 2 (HOUSE PARTY 1 AND 2!!!), it seems as if Alex Cole tailored his game after Willy Mays Hayes. I have to get the rest of this set. At least find a box on eBay.

Thanks Dubbs, you made my day again. This time for the second time with the same cards.
Posted by Motherscratcher at 8:06 AM

I love that Alex Cole card. I think I did a post about him before showing the '93 Upper Deck card of his while he was in Colorado. Same glasses. Genius.

Well, he couldn't be any worse at making pitching changes than Lasorda was.

So, yeah, why not? Torre's old anyway.

Not only did the Orioles plug Guthrie into the rotation immediately, he became our "ace", but mostly be default.

I actually DID buy a box of 92 Studio on ebay... I think it came to around $9 with shipping. Classic. I loved these cards when I was younger, and reading the bios on the back is priceless. I don't think there are even 300 cards in the base set, and the box had almost 700 cards, so I'm hoping I lucked in to collating the entire thing... if not, I'll buy another box. It'll be like a '92 Yearbook once they're all put together!!

Wow, for $9 I'm definately going to be on the lookout for that.