So, yeah, the TBL Card Fest is officially awesome. We have been contacted by the one and only Jim Hoosier (AKA Liam O'brien). Liam is Jesus Quintana's bowling partner. I have no reason to believe he has ever exposed himself to an 8 year old, or anyone else for that matter.

Jim has made the most of his celebrity by attending some of the Lebowski Fests that first sprang up in Louisville, put together by a small group of Achievers who only wanted to get drunk, go bowling, and quote the movie all night with a bunch of friends. It's grown into something I doubt even they ever envisioned.

And there is Liam, right in the middle of it. He must be like Leonard Nemoy at a Star Trek convention. Only considerably cooler.

Beardy put together this sweet card of Liam for the fest. 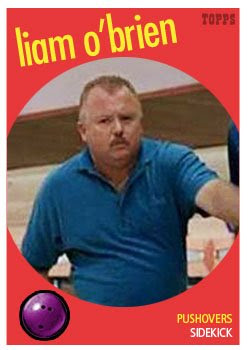 Well, Jim's friend, someone named "Chalupa" (it's all very mysterious) brought it to Jim's attention and he left a comment. He thought it was cool to have his own card. We couldn't agree more.

So I emailed Jim to let him know that, as of now, the Fest exists only on our computers and in our imagination. I keep thinking that some day I may be able to get a few sets made to send out to the contributors, but I fear it may be cost prohibitive. Either way I assured Jim that If such a thing does happen, he will be contacted (No physical harm intended. We're all brother shamuses here. With beverages.) and a set will be sent.

I'll paste the actual emails at the bottom.

Now, a little history about Jim. The Coens apparently left some flyers at a bowling alley looking for someone in their forties who looked Irish. Liam answered the flyer, got his picture taken, and a few days later got a call to meet with the Coens. A few weeks later he got offered the part.

Can you freakin' imagine that? Answer a flyer at the bowling alley and end up in a Coen Bros movie as the bowling partner of a pederast John Turturro in a purple onsie with a cocaine nail? Crazy world.

Well, Jim filled out the role of Liam beautifully. He has been basking in the well deserved glory of his role in this masterpiece by attending numerous Lebowskifests. 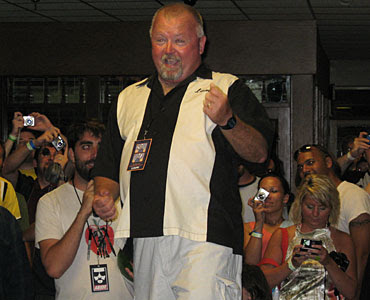 It must be a hell of a time being a normal guy, but also this huge celebrity for a small group of people. I couldn't be more thrilled to hear from him.

And, maybe "Chalupa" is Turturro. What do you think? I do know that I'm trying to figure out which one of my friends to nickname "Chalupa". Life has got to be better when you know a guy named "Chalupa", right?

Thanks for the contact, Jim. Keep in touch. When we take this from the ether to cardboard, you will be one of the first to know.

Here are the emails, if you care about that sort of thing.

Hey Jim, it was good to get your comment on my ridiculous little blog, even if it did take me 2 weeks to see it. Sorry about that. The Big Lebowski set is just a creation of me and a few other deadbeat baseball card enthusiasts with too much time on our hands. As of now it exists only out in the ether and on our computers.
>
> I was considering, after a hundred cards or so, of seeing if some kind of printing company could turn them into cards for us. I don't know about all of the copyright laws and that kind of shit but I doubt anyone would kick up a fuss if it was only a few sets for our personal use.
>
> If I can accomplish getting actual cards made I'll let you know so you can tell me where to send one.
>
> Thanks again for reading. It's a real thrill having one of the actors notice us, and not exactly a lightweight either.
>
> Mike Kramer (Motherscratcher)
>
> Achiever Card Blog

Dude thanks for the info.. It was just to cool to see my Mug on a baseball card.. Keep me updated and thanks for including me in your set.. See you in Louisville at the Lebowskifest in July.
Until then "Dios Mio"..
Jim
Posted by Motherscratcher at 10:53 AM

Yeah, that is totally awesome!

If anyone tried to print the cards as is, they would look terrible, due to the resolution differences between printed materials and television/computer monitors.

I tried to make most of mine as large as possible, but the photos are so small the best I could manage was 200dpi maximum. They would however, make some kick-ass t-shirts...

FYI- I used celuloid enlargements of the original 35mm film, as well as original negatives of personal on-set photographs from the assistant sound editor, Wyatt Sprague, for the images used on my cards. Therefore, the original jpeg images of all of the cards I made are scalable to 2-1/2" x 3-1/2", and when printed at 500 dpi... are- one word... Breathtaking.

PRP- If that is true, you are officially my hero. Unfortunately, I think it's just bush league psych out stuff.

So awesome, the set is taking on a life of it's own.

Good to see punkrockpaint only uses the highest quality shit for his shit. There must also be some kinda problem with yahoo fantasy baseball this week that's the only thing that would explain his kicking my ass.