Here we go with more cool stuff From Night Owl. 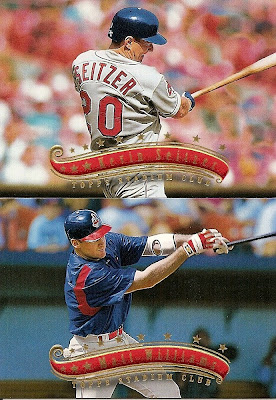 There was a time in the late 80's that I didn't think I could ever open a pack without getting Seitzer. I don't remember that as a bad thing. I always liked Seitzer. The memory doesn't really hold up. I don't seem to have any more Seitzers from back then than any other players. For some reason it just seemed that way to me.

I remember being so excited to be getting Matt Williams in 97. I don't want to say that he was a disappointment; I don't remember feeling that way at all. He just wasn't as good as he had been the previous seasons.

I was hoping to get the Matt Williams that may have broken the HR record if not for the strike. I got a player who was really good. No reason to complain there. 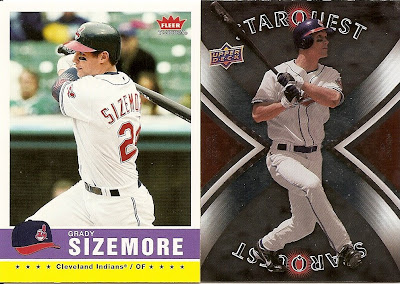 You knew there was going to be some Grady in here.

I have to say, I like the Star Quest cards. I worry that they are lloking too much the same year after year. Upper Deck needs to mix it up a little bit.

These Heritage cards are growing on me. It's not that I didn't like them. It's just that I never contemplated trying to build a set. I might give it a shot. I'll have to decide on the year, though. People seem less enthusiastic about this year's set than in years past.

I like the season highlights on the back of these. On Aug 21st Grady had 7 RBI. That's right...7. In case you forgot, Grady (inexplicably) is still a leadoff batter. Favorite player ever.

I love Rick Manning. He's been the Tribe's color commentator for as long as I can remember. I guess everyone probably loves their home town guys. The funny thing about Manning is that he looks the same now as he did in this sticker. The man doesn't age. 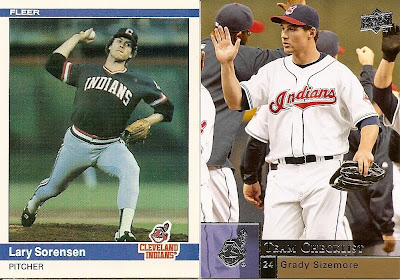 I vaguely remember the name Lary Sorensen. Dubbs and Thorzul probably remember him better than me because he spent the majority (and most successful part) of his career in Milwaukee. He was an All Star in 1978. By the time this card was made he wasn't even on the Tribe any more. No, he was already clogging the basepaths in Oakland in 1984. There's really only one thing that I want to know about Lary:

Where's the other "r" dude?

Upper Deck really did make a nice base set this year, didn't they? 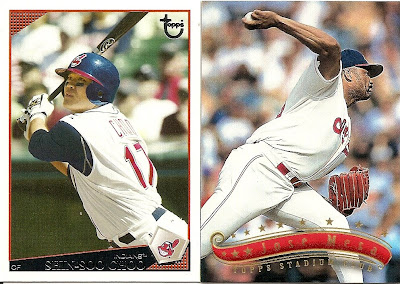 23. Shin-Soo Choo 2009 Topps Walmart or Target or something.

I can't remember which one is made on the old time cardboard and which one has the black boarder. This one is the old timey cardboard one (obviously). To tell you the truth I like all 3 of the sets. It's just asking too much to complete all 3.

This has one of those 6 degrees of Mantle things on the back. I don't know, I just don't find that very interesting at all. I think they screwed up when they made it Mantle. They should hve made it someone less well known, like Hoot Evers who played a decent outfield for the Tigers a half century ago. Wouldn't that be more interesting?

Hoot Evers, by the way, was traded to the Bo Sox in 52 along with a guy named Dizzy Trout. Just thought you should know. Where was I? Oh yeah, Shin-Soo Choo. I like that guy. 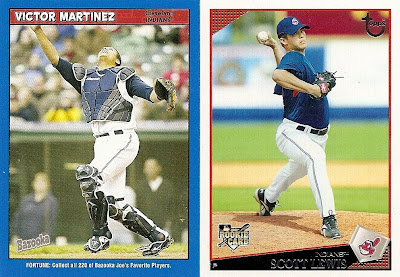 Did I mention that Martinez is hitting .400 this year?

Might as well end on a Buckeye. This is also a targmart version on the card. He finished the season last year gangbusters and made the rotation this year, until he got hurt. I hope he can make it back soon, we can use the help, especially in the bullpen.

The back of the card is hilarious. Instead of the 6 degrees of Hoot Evers, this card has "most wins by Ohio St Draftees." Here they are:

That's right...3 tied with 0 made the back of the card. That's how many great pitchers come out of Ohio State. Maybe we need to start paying the baseball players like the football players.

Thank you very much Greg for the sweet cards. I'll keep my eye out for any more cool Dodgers.
Posted by Motherscratcher at 8:04 AM

Those throwback cards are from Target. I only just saw the black border cards in our WalMart this week. It took them that long to get here.

Sorensen had major, major drunk driving issues after his career. Apparently he's on his way back after being in prison, according to wiki.

Sorry about the Mesa card. I guess that's like someone sending me a Delino Deshields card.