A Second Look At Grady

Yesterday I reviewed some cards from Beardy. One of them was the Allen + Ginter Grady Sizemore Mini. Beardy had sent me a few on these mini cards. I was exstatic to get them because I have very little A + G. In fact I've only ever opened up a few retail packs of it. Most of what I have has been given to me by others.

So it should come as no surprise that I didn't realize how truly awesome this card is. I remembered Beardy saying something about it in an email he had sent me, I just couldn't remember what. Sometimes I'm what Brandt would refer to as "differently abled, yes yes." Most others just kindly refer to me as "slow."

This is actually a Sizemore Mini No Number card. I probably didn't remember what Beardy had said about it because I didn't know what that meant. What the hell do I know about a No Number Card? 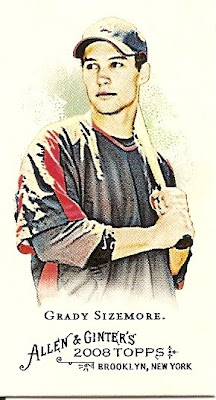 And, here's the back: 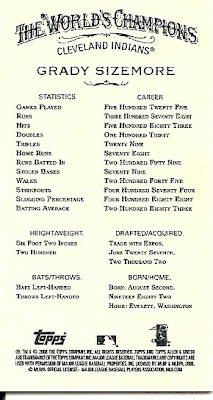 You see here? There's usually a number there right between the "Cleveland Indians" and Grady Sizemore".

Pretty cool huh? I have no doubt that I'm the last person out there that didn't know about these things. I looked on Beckett and it says that only 50 sets were made. I don't know for sure, but that seems like an awfully small print run making these cards pretty hard to get. It it 1:151 Hobby so you may get only one of these cards for opening 6-7 boxes as far as I can tell.

I doubt I would have ever figured it out on my own. Actually that's not really true. When I went to file it I would have inevitably stumbled across it and figured it out. You're not dealing with morons here. But, you get the point. I didn't know what I had.

This card deserved it's own post, not to be lumped in with Masa Kobayashi. Thanks again Beardy. Super cool.

Check out Beardy's blog. He's having a contest. Apparently, someone will be chasing him 3.1 miles and we have to guess how long it will take for him to be caught. Since I've already entered, and I have a very large brain (and it isn't one of those water heads either), there is very little chance that any of you might win. But, you never know, you may get lucky.

And, the winner of this contest gets the Adrian Beltre version of this card.
Posted by Motherscratcher at 6:09 PM

I have two no-numbered A&G cards from the '08 set. It took me months to realize that they didn't have numbers on the back and that was, in fact, intentional.

Why they would do that intentionally is way beyond me. In the old days, that would be known as an "error." But there are no errors these days, only variations.