So I'm going back through some of my archives and I find a few drafts that I never turned into posts. I have a really tough time posting anything from work, even if I have time, because I can't add any pictures or anything like that. Or, I guess I should say if there's a way, I don't know what it is..

Well, I got this great idea; I'll make posts with the scans and then I can add text later. This plan was foolproof. It's just that it's about 3 months later and I had completely forgotten about these raw posts just sitting there. I never end up blogging from work anyway. Sure, I leave all manner of stupid comments on all of your blogs, but, I rarely post anything from work. Oh well, it was a good idea poorly executed.

And, this is only a few weeks after I pat myself on the back and declare a brave new Achiever Card Blog because I got a post from the DC girls up in a respectable amount of time. That lasted for 1 post. I still have cards from Night Owl and Beardy to post. And, I found another post of cards from Dubbs just waiting to be written.

Anyway, I figured I'd get to it. I wanted to come up with a name for these posts about cards from other Bloggers and, on short notice, I came up with the incredibly original "Achiever Review." OK, let's just consider that a work in progress. I don't know what the name will be, but it won't be that. It will be phenomenal though.

A while back I won some sort of contest on White Sox Cards by answering some sort of trivia question. I don't remember the question, but it was yet another display of my brilliance. I don't think I cheated and looked it up, but I might have. The cards here are a sample of my prize. It is a sweet mix of Indians and White Sox. These are my nonsensical thoughts on those cards. 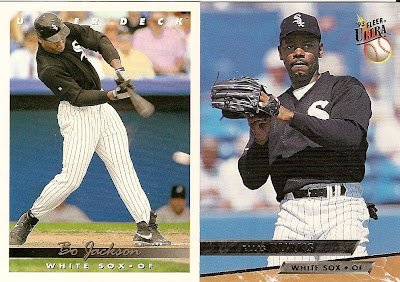 I remember I used to get so pissed when anyone would talk about how good Deion Sanders was. I hated Deion Sanders. I remember a quote from him back when he was just turning pro. It was something to the effect of he didn't like comparisons to Bo because he (Deion) didn't only want to be a 2 sport athlete, he wanted to "excel" in the sports. I guess he was somehow implying that Bo didn't excel.

I'm actually getting aggravated thinking about it right now. The only athlete better than Bo (in the history of the world) was Techmo Bo. Man, what could have been if that guy never got hurt. I will always be a Bo fan and a Bo collector, even if he did play for the White Sox.

I love Fleer Ultra. I just think it was always a good looking set of cards. I wanted to put up this Burks card because of the time he spent with the Tribe. He was a great player, just not flashy. 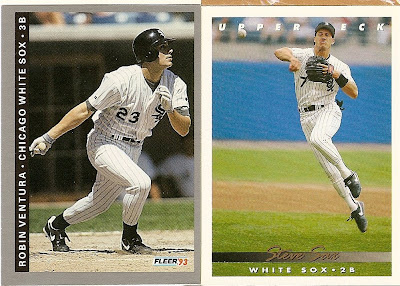 Prepare your ghast to be flabbered. Robin Ventura was a solid player. He had a nice long career. He was usually good, and at times he was very good.

How much do you think he'd give back not to have had his ass kicked by old man Ryan?

I was always a Steve Sax fan. I'm not sure why. I think it's because he was somehow the player that I would end up being, you know, when I eventually made it to the majors. He hit for a good average, popped a few dingers, stole a good share of bases...solid. That was Steve Sax. I always wished he was on the Indians.

Steve Sax is one of those guys that modern stats doesn't look to kindly upon. But, back then, I thought he was awesome. If he would have come along in the midst of the steroid era he would have been a superstar, you know, assuming he would have roided up like everyone else. 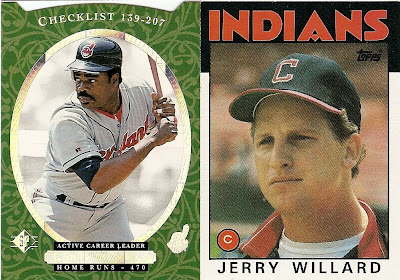 Look at good old Eddie. I didn't even realize that he was a member of the Subhelmet Hat Alliance. He was great for a few years with the Tribe. Even got his 3,000th hit with them. And, how was he re payed? He was traded to the Orioles for Kent Mercker. the only thing I can figure is that maybe they were trying to let him finish his career where he started. But he didn't, he went out to LA for a little bit.

This card has some kind of notch cut into the top. I'm not sure if that makes it a diecut or not.

Now we're talking. An unknown from the laziest set design ever, 1986 Topps. Jerry Willard and 1986 Topps go together like Yankees fans and nose hair.

Jerry Willard was a journeyman. He never spent more than 2 years with the same club in his career. that doesn't mean he isn't interesting. Signed as am amateur free agent by the Phillies in 1979 in December. I'm not sure what that means. Does that mean he wasn't good enough to be drafted? Why December?

Whatever. He played for 7 different organizations. that means he was involved in a lot of trades, right? Wrong. Jerry was involved in exactly 1 trade in his career. He was one of 5 players, including Julio Franco to be trade to Cleveland for Von Hayes. He spent some time in the minors and played parts of 2 seasons for the Tribe in 1984 and 1985. Then he was released.

Jerry Willard was signed and released 6 more times before hanging up his cleats in 1994. The Braves rode the Willard train twice.

True to form, the Tribe gave this player, who obviously wasn't good enough to be playing, more playing time than any other team. 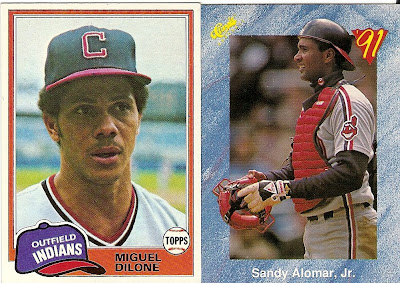 There is something interesting in Miguel's history that I haven't run across before. The end result, as far as I can tell, is that Oakland still owes the Pirates a player.

It seems that in 1978 Miguel Dilone, Elias Sosa, and a PTBNL were traded to the A's for Manny Sanguillen and a PTBNL in a trade that rocked the entire league to it's very core. A few days later the Pirates sent Mike Edwards to the A's. The A's never sent a player. Doesn't that mean the Pirates still have one coming?

In 1982, Dilone WAS the PTBNL when he was sent to the White Sox by Cleveland. 6 days after that he was sent from the White Sox back to the Pirates for Randy Niemann (The guy who sings the theme song to the Movie Major League, and Monk, I think)

So the Pirates ended up with the same guy that was so good they forgot to even collect all of the players for. Funny how things have a way of working themselves out.

I'm liking this set more and more. It's so ridiculous to me that they would actually make space on the back of the card to get an autograph. I want to get a signature there because I think I very well may the first person in the history of the world to do so. 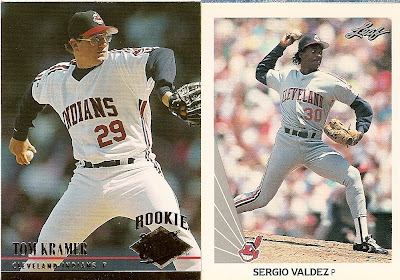 You'd think I would have been more interested in Tom Kramer, seeing as how we share a last name. I know very little, though. I do have a faint recollection of him. He pitched for the Tribe in 91 and 93. He started 16 games in 93 and didn't do TOO badly, especially considering what the Tribe was used to. Then he was traded to the Reds for the immortal John Hrusovsky. He was never heard form again. I vow to find out just what the heck happened to this guy in a future post.

Look at Sergio's stirups. I can't say for sure but that looks like those socks with the stirups sewn into the side. Total bush league. Maybe that's why Sergio spent more time in the minors than the majors.

And finally, a smorgasbord of Cory Snyder. I love me some Cory Snyder. Especially that Sportflics card. I had none of these so I was totally pumped to get them.

The back of the Classic card, as well as the space for the autograph, features 5 "Classic Baseball Questions." My favorite: "Is the batter out if he hits 5 foul balls?" NO.

I now have to re-evaluate everything I thought I knew about the game. Do you think Joe Sheehan is aware of this?

Thank you Steven for the contest and the awesome cards.
Posted by Motherscratcher at 10:14 AM

Bo was so freaking good at baseball it was unbelievable. Stupid degenerative hip. Deion "Willie Mays Hayes" wasn't even close to touching Bo's prowess on the diamond.

It's a shame Eddie didn't end his career in Bmore, but at least he hit #500 wearing black & orange. It almost seems a sin that his 3000th hit came in an Indians uni. No offense.

Beardy - On the diamond AND on the gridiron, as far as I'm concerned. I agree about Murray's 3,000th hit. Should have been in the black and orange.

Night Owl - I don't really get it myself. It's just something that felt right in my gut.

I'm glad that my contest could grant so much wisdom and nuggets of joy.