I was in that 2009 Finest break at I Am Joe Collector a few weeks ago and did really well. If one was so inclined, one could read about it here. If one was so inclined. I was really either really impressed with the product, or I was still high from Groat trading me that Grady Sizemore Cyan Plate. I wanted to get more to bust.

I figured I'd wait a few months for the price to fall. Joe Collector recommended that you wait for it to get under $60 a box and it was nowhere close to that at the time. Joe busts copious wax so he knows what he's talking about. So, I waited, but kept track on eBay.

Well, I somehow ended up landing 2 boxes for $134 shipped. That's $67 a box but I figured close enough. Well below what most of them were going for.

Here are the results of the first box. 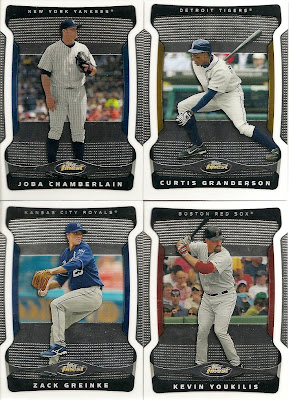 Base Cards - These are all guys I have on my fantasy team - The Urban Achievers.

Zach Greinke - I knew all along the kind of year he would have. Knew it all along.
Joba - In moments of weakness I think we probably all do things that we aren't proud of (draft Yankees).
Youkilis - Don't look at me like that. How am I supposed to win if I can't draft any Red Sox?
Curtis Granderson - I'm still holding out hope that Curtis will grow the tire-fro ala Oscar Gamble or Bake McBride. Maybe I should start an internet petition. Those always work.

Yeah, my fantasy team is not too shabby. And, I'm hanging on to Manny. I think when he returns he will OPS about 1.95 the rest of the way.

I decided to pick a trivia question. I didn't read them all but I thought this was a good one. Who the hell is Hugh Mulcahy? Do you think he would be available for Masa Kobayashi?

Answer at the bottom. 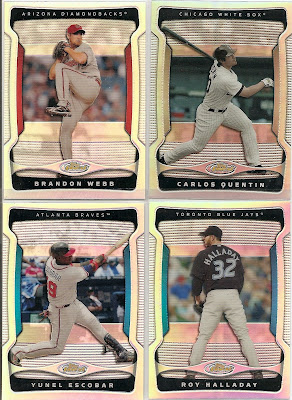 There's something funky going on in the Webb and Escobar cards. The silver refractory part has some weird black lines on it. I'm not sure if that comes through in the scan. My fear is that the Beckett book value may be ruined. 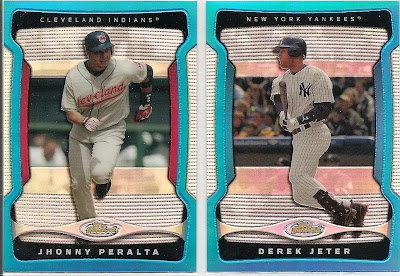 Look at that, Jeter and Peralta together. Arguably the best defensive SSs in the majors. Nothing getting by those guys. 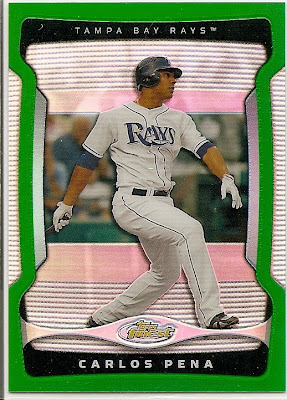 Not exactly a 1/1, but it is one of only eleven cards that are divisible by 9. So, I consider it a 1/11 which is considerably rarer and therefore much more valuable.

Thank you, I'll be here all week.

No, I will not stop making that joke. I still think it's funny. 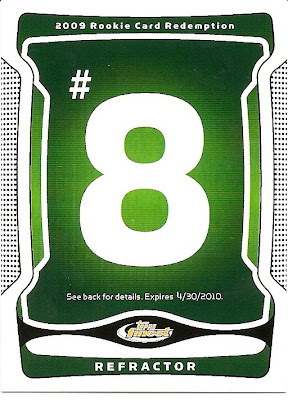 Sweet, I was hoping for #8. I just have a really good feeling about #8. Guys gonna be a stud. Mark it, dudes. 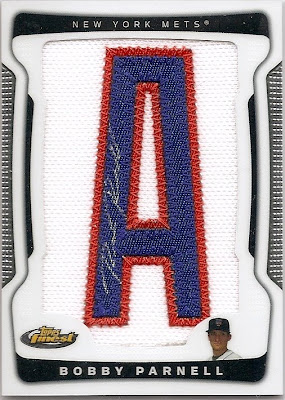 That is if I didn't already have the "L", or one of them anyway. I'm already 2/7ths to getting the entire "Parnell". I can't screw that up right?

Who is Bobby Parnell again? 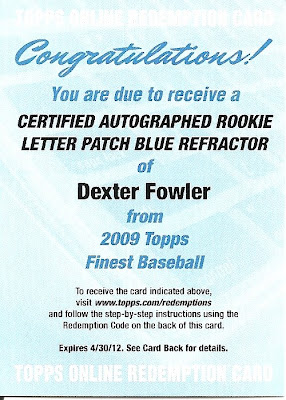 Nice. I know who this guy is. And it's a Blue Refractor Patch. Should be really nice. I will cherish it. That is until I trade it to Zman.

One more box still to come.

BTW - Bandages by Hot Hot Heat just started playing on my computer machine. I defy anyone to listen to this song and not be happier.

Oh yeah, Hugh Mulcahy was given the nickname "Losing Pitcher." What a bunch of assholes.
Posted by Motherscratcher at 8:07 AM

Aw, man, now I've been bitten by the Finest bug... I am seriously tempted to grab a box... I'm hoping for better odds than 1/1, though! I once pulled a Chris Harris 0/-1, and I am sure Topps has implemented that model somewhere!

Your break was better than mine.

Are you willing to trade the Dexter Fowler redemption?

Email me and let me know

Uh oh, another Fowler redemption on the trading block...

Another, I am just looking for one...Fowler is my fiance's MLB crush for some strange and bizarre reason

Sooz - sure, Jeter's available. Email me and we'll work something out no problem.

DP - I'm willing to trade the Fowler too. Unfortunately I wasn't thinking and I already redeemed it. I don't know when to expect it but we can work something out then, if you want.

Zman said "another" because I had already gotten a Fowler patch in the Joe Collector break and traded it to Zman. I'm begining to think that the only patches in this product are Fowler and Parnell.

I really need to get a wantlist put together. I've been saying I'll do that for a long time now.

Man, I forgot how much I like Bandages. Thanks!

$67 shipped is pretty good. Prices are falling. Blowout has dropped their prices significantly.

Hmmm... I probably won't buy an entire box but I'll see how much packs are going for next time I'm at the card shop. Any idea how much I can expect to spend for a pack or two?