Been busy lately. I haven't had a lot of time to post. Plus, after adding about 1,000 TBL cards to about 50 different posts for no apparent reason I needed to sleep for 21 straight hours.

Well, I was trying to think of something I could post really quick before I have to head to work. I figured I might as well show some of the latest stuff that I got off of eBay.

None of this stuff was very expensive. I can't remember how much I paid for any of it. I already deleted them from my account. It was no more than a few bucks for each. I'm such a bargain shopper. 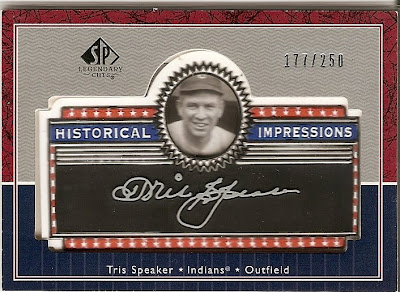 The first is this Tris Speaker card stamp thingy out of Legendary Cuts. 2003, I think. None of this stuff is actually anything I was looking for. I just thought that it would be a good idea to have a card from one of the greatest players in the Indians history.

Historical Impressions, it says. It's some kind of stamp. I have no idea why there is a stamp made into a card. To tell you the truth, the card kind of sucks. First of all, the stamp wasn't applied very well. It is way off center. I don't know how you get something that far off. I didn't realize it when I bought it, but to tell you the truth, I probably would have gotten it anyway. Like I said, it was only a few bucks. The seller still got positive feedback.

Second of all, the whole concept is monumentally stupid. Why the hell would anyone want a card with a stamp? A stamp for what. It's not like it was an old stamp that used to be used to answer fan mail back in the day or anything like that. Upper Deck just made a stamp and put it on a card. Then they called it 177/250. OH BOY! WHAT A GREAT CARD! ONLY 250 MADE! I guess that's supposed to make it desirable or something.

Third of all, the stamp is backward. I don't really have a Tris Speaker HISTORICAL IMPRESSIONS card here. What I actually have is a SNOISSERPMI LACIROTSIH rekaepS sirT card. I don't know if anyone thought of this in their meetings before making this set. But, if they did, they chose wrong. If you're going to make a stamp, at least get it right. 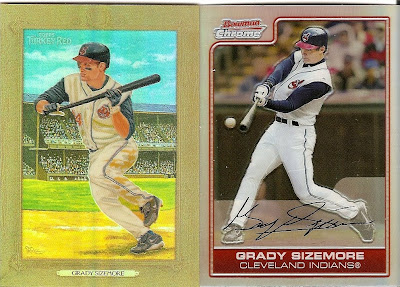 Two more Sizemore cards. You knew these were coming. 2007 Turkey Red Refractor. This is a sweet card. The best player around on the best brand around. And, it's shiny as hell. What's not to like?

If there is a type of card I like almost as much as Turkey Red, it's Chrome. Chrome of all kinds. Topps, Bowman, whatever. If it's shiny, give me some, Plus, it's a refractor too, so that makes it extra shiny. 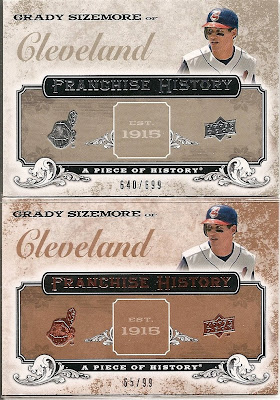 Two more Sizemore's. I was so excited to win these cards. OK, that's not true. I wasn't excited at all. They may be the dullest looking cards ever made. Upper Deck does it again. 2 cards, one grayish, the other pinkish. One /699, the other /99. Both have "EST. 1915" as the only historical info taking up the entirety of the card. Yeah. Great. Thanks. Sweet card. It's so rare.

But, it does have "Grady Sizemore" written on it. So now they're mine. 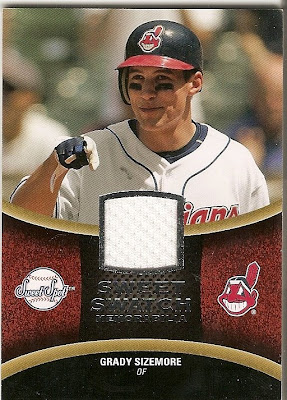 A Grady Sizemore "Sweet Swatch" out of Sweet Spot. I was just picking on Upper Deck a little bit for making stupid cards, and they were, so now I have to say that I really like Sweet spot. I think they look cool. And, on the back is a reprint of the signature of Richard P. McWilliam. That's right. The Richard P. McWilliam. I tell ya, honors and benefits already at the age of 34. Not too shabby. 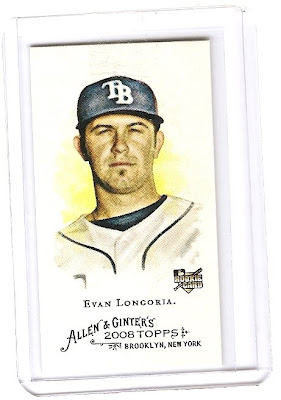 Lastly, an Evan Longoria Allen + Ginter mini. I don't know if it's a rookie card or not. It says rookie card, but we all know how much that means. I'm not a huge Longoria fan. Nothing against him. He's an exciting young player. It was just one of those add another card for an extra 25 cents shipping deals that always seem to get me. I'm always buying stuff that I don't really want or need to save $1.50 on shipping. It makes no sense. I know it makes no sense. I do it anyway. Is there anyone else like that?

Oh well, like I said. I like Longoria so it's a cool card to have. And I'm not ashamed to admit I like Allen + Ginter. I know that this set is usually frowned upon in the collecting community and nobody seems to like it. There are no collectors who collect this, for some reason.

It will make a good trade or gift at some point.
Posted by Motherscratcher at 11:40 AM

I gotta say that I know not what you are talking about. Buying additional items that you don't need on ebay just to save on shipping. That is crazy....ummmm never mind, I think I may resemble this post a bit too much.....guilty as well.
Duane

I always grab extra stuff on eBay to save on shipping. Sometimes I'm buying just to buy, but the trade/re-sell/gift factor is always there. A couple years ago, I scored a pile of PSA 10 rookie cards of late-80's/early-90's all-stars and fan favorites who aren't worth a ton. (i.e., Mark Grace rookies, 1989 Donruss Randy Johnson, etc) Sometimes it is just fun to get some grabs like that for trade-sweetener later. I travel a fair amount, so will take a pile of that sort of stuff to the regional card shows I can attend and it works out.

My most recent pick-up was a Poley Walnuts #SQ1. Someone referenced it the other day on their blog posting and I couldn't resist. Sweet!

Nice cards sir! I always end up buying crap on ebay to save on shipping too. I mean, you get more stuff, so what's not to like about it?

This is my first official comment posted from my new official job.

I have one thing to say about that stamp card: tihs

I have never seen the stamp cards before. Interesting concept. I will have to check those out. Admitting that I like the concept wouldn't convince me to buy one... Uless they made a Gwynn one! Good point about the reversal on the stamp. I wouldn't have figured that out until I inked it up and tried to roll it onto an old baseball... (Hmmmm, new blog post idea. Tap-tap it's mine!)

Well, I am the kind that buys crap on ebay just to buy crap on ebay.. Been doin it for ten years now. I'll buy a bunch of cards I don't need or collect then convince my wife that I got them to give away. It goes over much smoother now that we have separate bank accounts. Though, I still get the very quizzical look about buying a gazillion cards to turn around and give away... :-)